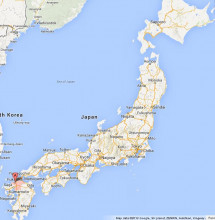 Japan is home to 18 cultural and 4 natural UNESCO World Heritage sites that can be found throughout the country.

Fukuoka is in Kyushu Island with the population of 2.5 million, the sixth largest city in Japan. The average temperature in May is 90.1 degrees (high) and 60.1 degrees (low) with 10 inches of precipitation. It is bordered on the west, south, and east side by mountains and faces the Sea of Japan on the north. The city is approximately 677 miles and a 90-minute flight from Tokyo.

Fukuoka is the economic and industrial center of Kyushu Island and because it is very close to other Asian countries, the harbor has played an important role. Fukuoka has both historical places, represented by Dazaifu Shrine and modern aspects such as “Canal City” shopping and entertaining center.

Take advantage of this extraordinary opportunity in Fukuoka, Japan, where you will learn the language as well as conduct a psychological analysis of the traditional and current Japanese pop cultures.

Excursions will include visits to a local robot company, the Dazaifu Tenmangu shrine and Kyushu National and Kitakyushu Manga museums, participation in a Hakata doll painting and Japanese tea ceremony as well as the opportunity to watch a Japanese baseball game and hear a lecture on the business management of a baseball team. You will also visit Ohori Park Japanese Garden/Art Museum, visit local elementary and high schools and have a kimono dress-up experience.

Highlights of your stay in Japan will include 4 nights with a local Japanese host family. This is a rare opportunity to establish relationships with Japanese people and to learn the way of life in Japan!

Lonely Planet suggests: 8 Best Things to Do in Fukuoka

(may vary from year to year)