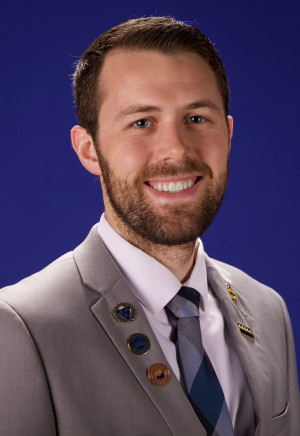 Johnathan Speakman, an Arizona native, said being number six out of eight children in his family taught him to serve others. Because of the joy he finds in helping others, he has always known that he wants to give service to others throughout his life. However, the service he has been involved in throughout his MCC experience has helped to shape how he wants to do that.

”As I have tried to do my part to serve in my community, I have to come to realize something more significant. It is natural for me to look for the biggest ways I can serve; but usually the biggest impact I can make is with those people immediately around me, such as my family, friends, and neighbors,” Speakman said. “If more people were focused on helping those around them, more of the hungry would be fed, the sick would be cared for, and the broken would be healed.”

Speakman added that the most prominent experience that influenced the course of his life is the two years he spent serving the people of Zambia and Malawi. During that time, his love of working closely with people to improve their lives deepened.

Speaking of his time spent there, Speakman said, “My favorite part of living in Zambia and Malawi for two years was hands down the people. Getting to know them and be in their homes for two straight years made them family to me. There was one place I got to go to often, called Mothers Without Borders, where children who were abandoned by their parents were sent to be taken care of. Those children are such beautiful souls that have so little in life, but are worth so much to me.”

After returning to Arizona from Africa, Speakman began attending MCC in spring 2014, embarking on a journey to earn a business degree. He was fortunate to find professors and mentors who helped to show him ways he could expand his education beyond the classroom. As a result, he served with agencies in the community like Boulder Mountain Therapy and Mesa United Way. He held three officer positions in the MCC Phi Theta Kappa Honor Society and taught some of the first free citizenship classes on MCC’s campus.

“My favorite part of Phi Theta Kappa is how it has transformed my life,” Speakman said. “Not only do I owe a great amount of gratitude to the advisors, who have been such important mentors to me, but the organization has challenged me to grow and be better as a scholar, a leader, a community member, and a friend. It has taught me that my potential in life is unlimited and so is everyone else's around me. It has also shown me that doors open to those who put in a little more work.”

Speakman is graduating with the highest distinction and has earned his Associate in Arts, Associate in Business – General Requirements, Arizona General Education Curriculum-A (AGEC-A), and Arizona General Education Curriculum-B (AGEC-B).  He is transferring to the entrepreneurship program at Arizona State University in fall 2018.

“Know that true success is about being in it for the long haul. Remain focused on the long-term goals you have and don’t lose sight of them. If we can learn the principles in life that lead to success, study them, and live by them, success will surely become ours,” Speakman said.

For his academic achievement, leadership and campus and community engagement, he has been recognized as one of the top students in Arizona, one of the top 20 in the United States, and one of 15 Phi Theta Kappa members to be named a Guistwhite Scholar. However, above all these awards and recognitions, the two titles he says he is most proud of are husband and father to his wife and daughter.