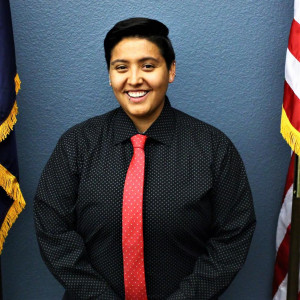 Lorena Austin will have one very important person cheering her on when she graduates in May, her 93 year old grandmother.

“My grandmother was born in a box car in 1925,” said Austin, MCC’s student body president. “Her father worked on the railroad and she worked in the fields as a farm worker. She was unable to finish her education, so during her entire life, she has emphasized education. My family members have gone on to become nurses, accountants, a lawyer and more because of her foundation. Hopefully she’ll be able to attend my graduation ceremony.”

Austin’s path to higher education hasn’t been an easy one. Born in Mesa, she graduated from a California high school in 2006. Her dad, Phil Austin, a local civil rights attorney, recommended MCC as a good place to begin her college education.

“I enrolled at MCC, got a job and basically overextended myself,” said Austin, 29. “I didn’t know about the resources available on campus. I just went to school, left campus and went to work. I started falling behind in some of my classes and began to feel not good enough or smart enough.”

“I joke that I have the highest dropout rate at MCC. I probably dropped out five times. I didn’t feel like I was accomplishing anything.”

Austin decided to move to St. Louis, where her brother lived, and her experiences there shaped her life. One of the first steps was to accept who she really is.

“I always struggled with my sexual orientation,” Austin said. “I was really encouraged by a group of friends to finally become who I was. That reality shaped what I wanted to do.”

Another formative experience happened when Michael Brown, a young African American suspect in the robbery of a convenience store, was fatally shot by a police officer 10 miles from where she lived.

“I saw the community implode,” Austin said. “There were protests and my neighborhood went into martial law. I knew then what I wanted to do. I wanted to become active in my community. I wanted to convey my thoughts and I knew I couldn’t do that without an education.”

“My family has been in Mesa since the 1920s,” Austin said. “My dad is a civil rights attorney here. I knew I could make a difference in Mesa.”

During a community event at MCC, Austin spoke with the Mesa police chief, the MCC president and several college administrators. When they learned her story, they wanted her to speak to students about why she came back.

“Kris came up to me and said I want to work with you,” Austin said. “She dragged me to the enrollment center and had me take placement tests and gave me a job. That’s how I got here. If it wasn’t for her, I wouldn’t be here. She took the time to get me into MCC.”

Austin, originally a criminal justice major, dug in and completed classes, got involved in campus life and eventually was elected president of the Associated Students of Mesa Community College (ASMCC), the campus student government.

After taking sociology classes with professors Mona Scott and Paul Harasha, she changed her major to sociology and never looked back.

“I really started understanding how MCC functioned and started networking with the faculty and staff,” Austin said. “No one ever told me I couldn’t make my ideas happen. I have been nothing but encouraged at this college and it has really allowed me to thrive.”

During her term as ASMCC President, Austin has accomplished more than she thought would be possible. She’s an honors student, has received several awards and scholarships, including the Chancellor’s Civic Leadership Medallion, is a member of Phi Theta Kappa, former President of the National Society of Leadership Success and the lead Student Ambassador.

Austin said the best part, though, is that she saved $25,000 by attending classes at MCC rather than beginning at a four-year university.

“I really wanted to let high school students know what a great opportunity they have at this college,” she said. “It’s affordable and accessible with high-quality programs and professors. If students understood the magnitude of the resources, that could help students experience success. I’ve tried to help them find the resources that I didn’t find when I first came here.

“Along with the cost savings, I’ve had invaluable experiences,” Austin said. “I’ve spoken to crowds of 500 or more people. It’s lifted my self confidence and let me know I could make a positive impact. This was the greatest jumping off point I could ever imagine.”

This fall, Austin will pursue a bachelor’s degree in U.S. and Mexican Regional Immigration Policy and Economy at Arizona State University. She has received entry into the Next Generation Service Corps, part of the Public Service Academy at ASU, which pays for her entire base tuition. Her goal is to attend law school and come back to MCC and teach as a professor or work in college administration. She may also consider running for public office.

Austin’s advice to incoming students: “Grades do not determine your intelligence. Don’t be afraid, I tell students, your past failures don’t matter, you can do all things if you find something you’re passionate about. I’m so grateful for what I found at MCC.”