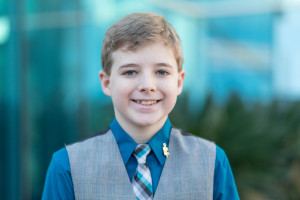 The youngest in his family and the youngest student of his graduating class, 14-year-old Maxwell Manning will follow in the footsteps of his parents and older siblings as he graduates in May.

“I’m the youngest of six and they all have done it before me so for me it’s not weird or anything. It’s just normal,” said Manning. “I’ve never noticed anything different. Everyone in my life, like my parents, who are both doctors, are an inspiration to me.”

“Going to community college opens up a lot of opportunities through scholarships,” Manning said.

Manning was one of the few chosen from the district and one of four chosen from MCC to be on this year’s All-Arizona Academic Team, an achievement not uncommon for his siblings, many of whom were also on the team in their time. This honor provided him with a tuition waiver to attend one of Arizona’s three state universities, the 2018 Hites Scholarship, and a Coca-Cola Academic Team Gold Scholar award, providing combined scholarships of $9,000 toward his education.

After earning an undergraduate degree in biology from Arizona State University, Maxwell plans to pursue graduate work in zoological studies with an emphasis in ecology and systematics.

“I think biology is my best subject and I like it a lot. I want to get a master’s in zoology and work in the primatology department, which is big apes and monkeys,” Manning said. “I’ve always been interested in animals and the way people communicate [with them] and biology is a good basis for all of that.”