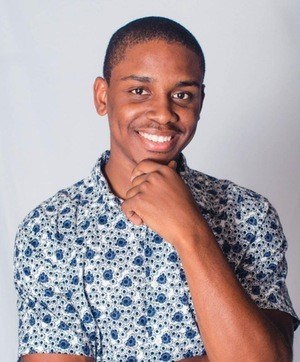 Malique Washington took advice from his grandfather to complete his associate’s degree at Mesa Community College and along the way, he played on the MCC basketball team and wrote a children’s book.

The book honored his grandfather, the late James Kelson, a 36-year educator and former principal at John R. Davis Elementary School in Phoenix..

“My grandfather inspired me,” said Washington, 20. “His spirit is my guiding light.”

Washington said his grandfather always wanted to write a children’s book, but passed away before doing so. So Washington wrote it with his grandfather in mind. The book, “Be a Star!,” encourages children to work hard and believe they can be a star in whatever they choose to do.

One thing Washington chose to do was play basketball for the MCC Thunderbirds and his grandfather was one of his biggest fans, cheering him on and supporting him during many games.

Washington will graduate with an associate’s degree in business this May and plans to earn a bachelor’s degree and play basketball professionally. An author and an entrepreneur, he is also interested in taping motivational TEDx Talks and has written a second children’s book.

Washington said the Presidents’ Honors Scholarship covered all his tuition at MCC.

“It reduced my debt,” he said. “Otherwise I would have had to use financial aid. I was very blessed to receive that scholarship.”

While at MCC, he participated in the Phoenix chapter of the National Alliance of African American Athletes.

“That association really makes a difference,” he said. “Community service is important and good for your well-being. It’s only right to make the world a better place. Helping others is worthwhile and a win-win situation.”

In addition to his grandfather, Washington said MCC coach Sam Ballard inspired him. “I admire him as a coach and as a person. He impacts your life on and off the court.”

His advice for incoming student athletes?

“Be humble,” he said. “You can learn from anyone. Be a learner in and out of the classroom, even after you receive your degree and don’t ever give up. Out of the ashes you will rise. Sometimes the worst times can bring the biggest rewards.”