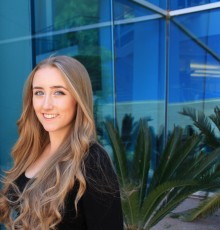 For Elliott Adams, 19, an immigrant originally from the United Kingdom, receiving a degree from an American community college seemed farfetched. But after being accepted into the Honors program at Mesa Community College and receiving the Presidents’ Scholarship, the possibility of achieving that academic goal became more of a reality.

“Growing up in a single-parent household as well as being an immigrant proved some challenges for me, especially financially,” Adams said. “So receiving the Presidents’ Scholarship and being able to attend Mesa Community College tuition-free was an unbelievable opportunity for me. My family is very proud.”

Adams will be receiving an Associate’s in Arts degree from MCC after spending two years taking classes at both the Southern and Dobson campus and Red Mountain campus and maintaining a 3.9 GPA.  Majoring in Journalism, Adams not only took courses in her chosen profession, but also worked as News Editor for the Mesa Legend, MCC’s on-campus newspaper.

“Working at the Mesa Legend gave me an incredible chance to get hands-on experience in the field of journalism,” Adams said. “Thanks to Jack Mullins, instead of just taking class after class about the art of writing, I got to actually put that knowledge to use and produce news articles that were published and distributed across campus. Besides being an incredibly fun job and something to put on my resume, I think it has also prepared me for life after college and gave me an idea of how well I will do in the world of journalism.”

Adams plans to transfer to the Walter Cronkite School of Journalism and Mass Communication at Arizona State University to pursue a Bachelor’s degree in Journalism and said MCC has made this transfer so much easier.

“Being able to attend MCC and get two years of credits completed makes my journey towards a Bachelor’s degree so much more possible,” Adams said. “Why would I go straight to a four-year university which I know I cannot afford independently, when I could attend MCC and receive the same quality education at a much lower cost?”