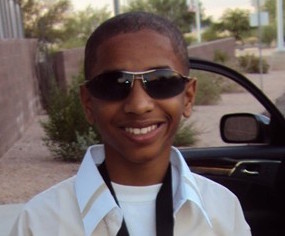 Brandon Alexander, 16, has two graduation ceremonies this month. On May 9, he will cross the stage to receive two associate’s degrees from Mesa Community College. Then, 6 days later, he will receive his high school diploma from AAEC Red Mountain Charter School.

It might sound a little backward, but for Brandon, a physics and business major, it’s the result of years of hard work and careful planning.

Brandon began Mesa Community College’s Students Striving for Excellent Performance (STEP) Program when he was 12 years old. The program and schools provided him with the opportunity to earn his college degrees early through concurrent enrollment and mentoring assistance.

His family first heard about the program while at his older brother’s school.

“I like the program because it opens a doorway for kids who want to take a step ahead and accelerate their education,” Brandon said. “It’s an opportunity that is hard to come by.”

When Brandon began attending classes at MCC’s Red Mountain Campus at age 12, other students would look at him with confusion and ask him how old he was. Once the age question was out of the way, he quickly assimilated into college life.

“I loved being a part of the college community,” Brandon said. “I enjoy meeting a lot of different people, challenging myself and I enjoy the campus itself … since most of my classes were at the Red Mountain Campus, the instructors knew me from a young age and it made me feel like I was at home. It’s a nice community with different types of people.”

Brandon said many people, especially MCC Student Services Specialist Dwayne McIntosh, were very helpful as he overcame the challenge of adapting to a college environment at a young age and developing his work ethic. For Brandon, the work was worth it.

“They gave me an opportunity to get ahead in my education and that will help me in the long run,” Brandon said.

Brandon’s mother, Alicia, said she’d like more people to learn about the program.

“What I like is that it gives young minorities an opportunity to expand and have a chance at college,” Alicia said.  “I like that they did not discriminate because of his age. He was only 10 when he started. They didn’t think he would pass the entrance test, but he did. I’m happy he had that opportunity.”

His career interest is space exploration technologies and sustainable development.

“Those industries will benefit mankind in the biggest possible way,” Brandon said.  “It’s exciting because it will play such an important role in the future of civilization and I want to be a part of that.

Alicia said she is extremely proud of Brandon’s accomplishments.

“He is the youngest of five kids. He lost a brother six months ago and he has not wavered,” Alicia said.  “He has been very consistent. He’s a typical teenager, drives me nuts, but he has always been on top of his studies. It’s amazing what he has done. He’s been going to college and high school for the last 4 or 5 years and has been making it happen. I’m extremely proud.”

She said she would definitely recommend the program to other parents.

“It’s been very beneficial, it allowed him to earn two degrees and mature and obtain people skills,” Alicia said.  “He is only 16, but he has the mindset of a mature 20-something and it’s because of the people he met in the program. Dr. Karen Hardin of MCC’s STEP Program has given us a fantastic opportunity for him to grow as a young man in the society.”