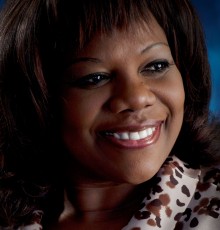 For many nontraditional students at Mesa Community College, age is just a number, and academic success is down to hard work, dedication, and focus. Mary Ann Jalloh, 57, is a prime example of that commitment to the college as she graduates this May with an Associates in Fine Arts degree.

“Education is in my spirit,” Jalloh said. “I don’t care how old I get.”

Becoming a full-time student at MCC who was consistently on the honor roll was something that seemed impossible for Jalloh. Originally from Mississippi, Jalloh grew up in a poverty-stricken home with a tin top roof and no running water.

“We didn’t have any money,” Jalloh said. “I wanted to do the activities the other kids were doing, I wanted to play basketball and learn to play the saxophone, but we had no money for that.”

Though Jalloh didn’t graduate high school, she will be the first in her family of eight to graduate from college.

“In high school I only received C’s, D’s, and F’s, and never graduated,” Jalloh said. “Now I’m at MCC, graduating with straight A’s.”

During her time at MCC, Jalloh was a member of Phi Theta Kappa and also received her GED from MCC’s Red Mountain campus. Aside from her academic success, she also devoted her time to provide volunteer service at A New Leaf, a local men’s homeless shelter.

Jalloh also found a home in MCC’s theatre department, volunteering as a theatre make-up artist, auditioning for productions, and even submitting her own scripts. She said theatre and the fine arts is a major part of her life, and she considers herself a make-up artist, actress, director, and producer, and hopes to make this a part of her professional future.

Jalloh credits her success at MCC to her art, her faith, and her brother Pastor Wilton Holmes and his wife, Apostle Yolanda Holmes.

“If you teach righteousness, love forever, and learn to forgive, you can make it,” Jalloh said. “I couldn’t make it without the help of the Lord; he helps me let my light shine everywhere I go.”

Though Jalloh’s journey to graduation was a tough one, she said she is proud of her achievements and hopes to inspire other people to succeed as well.

“I made it, that’s my motto,” she said. “Through the storms and the rain, I made it. No hurdles are going to stop me.”

What advice would Jalloh give to older students hoping to succeed and excel at MCC?