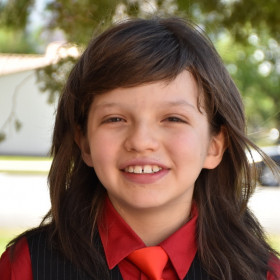 You might describe Christian Armanti’s first day of classes at Mesa Community College (MCC) as a jaw-dropping experience. Not for him, but for his professors and classmates. Armanti, a 12-year-old homeschooled student, said in one class he could hear a pin drop when he opened the door.

“The first week was awkward, but as time passed, the students were very welcoming... The professors, and the staff in the library, testing center and cafeteria were all very kind,” Armanti said. “The environment at MCC is great, it’s like a community.”

Armanti, who graduated with an associate in science degree from MCC, earned his associate degree before earning his high school diploma.

MCC professor Erin Rawson says Christian is an incredible student, “Christian is an exceptional honors student who knocks my socks off every day with his outstanding academic work,” Rawson said.

Armanti’s major is science with an emphasis in engineering and biological sciences. He has already been accepted into Arizona State University’s Ira A. Fulton’s biomedical engineering program. Armanti’s career goal is to be a neurosurgeon.

“Ever since I was little, I really liked helping people,” Armanti said. “I like learning about the human body, and I love to create things. I’m also very good at math.”

Armanti first heard about MCC from his parents, Patricia and Christian, who both attended MCC. The family lives not too far from the Southern and Dobson Campus. He said he enjoyed the campus setting, with the relaxing outdoor areas of the rose garden, trees, birds and the snakes inside the Life Science building.

When life as a young college student got overwhelming, Armanti turned to music to handle the stress. He plays the piano, the trumpet, sings and composes music. One of his piano compositions was recently selected as top in the nation for a music competition.

While at MCC, Armanti took advantage of the Tutoring Center and other college resources. He was active in Phi Theta Kappa, the Honors Program and was named to the President’s Honor Roll.

Armanti said he would definitely recommend MCC to others of all ages as a great place to begin college.

“I was impressed that people of all ages attend the college,” Armanti said. “MCC is just the right size—with smaller classes where students get to know each other and the professors, who are incredible, have more time and are very accessible. The college is a very welcoming community.”

Learn more about the Associate in Science program here.