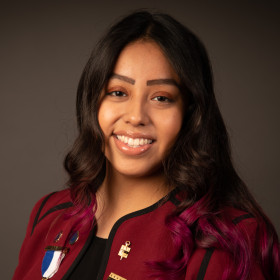 In 2018, Abigaly “Abby” Atonal Rodriguez nearly dropped out of Mesa Community College due to financial insecurities and fear of failure. But she didn’t.

“The reason I stayed was because I had found people that cared about me as a person, as a scholar and as a leader on campus and in the community,” said Atonal Rodriguez, 21, a Gilbert resident. “Suddenly I felt like I wasn't just this first-generation college student. Instead, I felt like I could figure everything out because I had a community around me to guide me when I was most lost.”

After conquering the difficulties, Atonal Rodriguez went on to be awarded a Jack Kent Cooke Foundation Undergraduate Transfer Scholarship, worth up to $40,000 a year for up to three years, was chosen as a Phi Theta Kappa Guistwhite Scholar, one of 15 from across the nation to receive a $5,000 scholarship for baccalaureate studies, and was selected for the All-Arizona Academic First team, earning $1,000 for her academic excellence, leadership accomplishments and engagement in PTK programs. She received a Positive Path scholarship worth $1,000 and is the MCC 2020 Honors Speaker.

“I owe my success to all the loving people I found at the college and the irreplaceable experiences MCC has to offer,” Atonal Rodriguez said.

“They set the standard in our family that we would each pay for college ourselves, and a community college was the best route,” Atonal Rodriguez said. “I would advise other high school students to choose MCC. Ignore the ‘community college’ stigma. It’s a great environment.”

Atonal Rodriguez said she did not decide to major in sociology until speaking with an advisor.

“Sociology encapsulated everything I was interested in and I’ve loved all my sociology professors,” said Atonal Rodriguez, whose ultimate goal is to earn a doctorate degree. “It’s been phenomenal.”

She graduates from MCC with an associate in arts degree, an AGEC and a certificate in global citizenship. Atonal Rodriguez plans to attend Williams College in Massachusetts, with a goal to contribute toward education equity. Her dream job is to work for the Arizona Department of Education.

“I want to make an impact educationally,” she said.

Atonal Rodriguez said her MCC experience has changed her life. In addition to PTK, she was a member of PSI Beta, on the President’s Honor Roll and contributed many hours toward service-learning projects.

“My membership in PTK was most impactful,” she said. “MCC’s PTK chapter is definitely a dedicated community of leaders, full of passionate people. The advisors care about you as a person and it’s a family.”