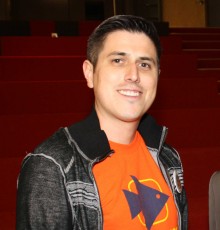 Ricky LeDesma - Associate of Arts, Associate of Science Degrees For Mesa Community College graduate Ricky LeDesma, 30, of Chandler, the decision to return to college is one of the most rewarding and beneficial decisions of his life.

“I was tending bar and although I loved it, I knew I could do much more,” LeDesma said. “My passions have always been science and space exploration. I decided it was time to make a change in my life so I could change my passions from a hobby to a career.”

LeDesma said the desire to go to college originated with his younger brother.

“He went through MCC and received a full ride scholarship to Columbia University as a result of his involvement,” LeDesma said. “He was not only an inspiration, but showed me what was possible at a community college.”

From Bartender to Aerospace Engineer

This week, LeDesma received Associate of Science and Associate of Arts degrees from MCC. Now he’s off to Arizona State University to attend one of the Ira A. Fulton Schools of Engineering. He has been accepted into the Aerospace Engineering program at the School for Engineering of Matter, Transport, and Energy.

“I plan on enrolling during my senior year into their accelerated program, during which I will begin to work on my master's degree,” LeDesma said.  “This will put me in position to receive my master's degree one year after I finish my undergraduate degree. After that I will apply to a doctorate program. My ultimate plan is to design spacecraft either for NASA or the private sector.”

LeDesma said he faced a number of challenges along the way.

“My biggest challenges were balancing schoolwork and extracurricular activities while working full time to pay the bills,” he said.  “I also had to overcome the mental doubts I placed on myself for being a non-traditional college student.”

To overcome these hurdles, he said he looked to the people in his personal life, such as his brother, plus the people he met on campus, to help him realize he wasn't the only person going through these struggles.

While at MCC, he served as the Phi Theta Kappa Omicron Beta Chapter President, a position he found very beneficial.

“I would argue that the professional and leadership development I obtained as a result will be the most beneficial aspect of my college career so far,” LeDesma said.  “I have already begun to utilize the skills I have learned in my personal, academic, and professional life.”

“The best part of the NASA NCAS program was the opportunity to visit NASA's Jet Propulsion Laboratory and work with NASA scientists and engineers,” LeDesma said. “I was able to make connections with NASA employees which I will utilize soon when I apply for internships. In addition, I was able to meet and speak with a personal hero of mine, Adam Steltzner.”

His advice to other students?

“You can overcome all obstacles that are trying to prevent you from getting an education,” he said. “Just remember to utilize your resources on campus and get involved. The more involved you are on campus, the better chance you have at succeeding. If you make your education your priority, you will do better than you ever could have imagined.”