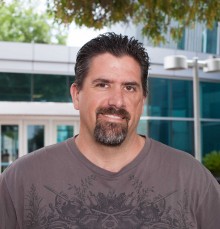 Dana Gallagher - Associate in Applied Science Degree After 15 years working as a heavy equipment mechanic, Dana Gallagher found himself at a crossroads in his life. Although that industry provided a good-paying career with plenty of options for advancement within that career, he found himself desiring a completely new career field with new challenges.

At 36, the desire to continue the same physical activities he enjoyed in his ‘20s and early ‘30s, including cycling, running marathons and hiking, was also a driving force in his career change.

So he turned to Mesa Community College’s Cisco Networking Academy.

“I walked into Bob Samson’s office and started to formulate my plan,” Gallagher said. “I’m glad I did. While I didn’t know early on if I would like this new career field choice, I quickly realized that I loved the world of computer networking. I tell people that I am doing on computer networks the same thing I did on heavy equipment. I troubleshoot and repair problems, and keep the network(s) secure and keep everyone up and running.”

He begins work next week with a multinational company based out of Colorado. He received the offer within a couple of weeks of beginning his job search.  Gallagher said he is excited about the position, which has a good benefits package and a higher starting salary then when he left his former career. The opportunities for advancement within the field are also promising.

“I plan to work toward a bachelor’s degree as well as higher industry certifications,” Gallagher said. “I am going educate myself in Linux and Juniper technologies in addition to Cisco so I can be a well-rounded industry professional.”

It took Gallagher about 18 months to complete the Cisco CCNA Certification. He continued to work full time while he took two classes in spring 2014, but left his (now former) career to focus on completing the remaining two classes in the fall.

He said learning networking and adjusting to a completely different industry was challenging.

“But when I set out to do something, I don’t let anything stand in my way,” Gallagher said.

He worked hard at learning all he could from the instructors. His efforts paid off.

“I proved to the staff in the Cisco Networking Academy that I was dedicated and not just there for the grade,” Gallagher said. “I really wanted to learn all the details.  Soon I was afforded privileges to work on the equipment and in the lab outside of classroom hours.”

Gallagher tells others entering the program to take a look at the time commitment.

“If you want to succeed  in anything, you have to be willing put in the time and effort,” he said.

He also tells people the program is an excellent value for the money.

“The tuition is very affordable and access to resources is unlimited,” Gallagher said.

One of his best experiences in the program was competing in the Avnet Tech Games. He won a $1,000 scholarship and a remote-controlled drone quadcopter.

“It was very beneficial to meet professionals in the industry,” Gallagher said. “And it was because of the Cisco Networking Academy that we were so prepared and successful.”