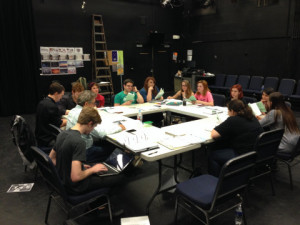 ALL Theatre Performance Majors are required to audition for all mainstage productions each academic year and are required to accept all roles as cast. This requirement is to achieve the following academic goals:

In most academic years, the TFAD produces four mainstage productions.

Anyone from the community may audition for MCC Theatre & Film Arts productions, however, if cast, the actor must also register for one credit hour of THP201AA Theatre Production.

These are group auditions

Please arrive before 5pm to sign in; Auditions will start promptly at 5pm

If only auditioning for Stop Kiss, then a 1 minute contemporary monologue.

For callbacks be prepared to read from provided sides.

Wear comfortable clothing that allows for freedom of movement

Rehearsals begin on March 6,2023 with an initial company meeting that same day at 4pm

Tech begins April 19. There are six performances between April 28 and May 6.

Four Athenians run away to the forest only to have Puck the fairy make both of the boys fall in love with the same girl. The four run through the forest pursuing each other while Puck helps his master play a trick on the fairy queen.

Also known as Robin Goodfellow, Puck is Oberon’s jester, a mischievous fairy who delights in playing pranks on mortals. Though A Midsummer Night’s Dream divides its action between several groups of characters, Puck is the closest thing the play has to a protagonist. His enchanting, mischievous spirit pervades the atmosphere, and his antics are responsible for many of the complications that propel the other main plots: he mistakes the young Athenians, applying the love potion to Lysander instead of Demetrius, thereby causing chaos within the group of young lovers; he also transforms Bottom’s head into that of an ass.

The king of the fairies, Oberon is initially at odds with his wife, Titania, because she refuses to relinquish control of a young Indian prince whom he wants for a knight. Oberon’s desire for revenge on Titania leads him to send Puck to obtain the love-potion flower that creates so much of the play’s confusion and farce.

The beautiful queen of the fairies, Titania resists the attempts of her husband, Oberon, to make a knight of the young Indian prince that she has been given. Titania’s brief, potion-induced love for Nick Bottom, whose head Puck has transformed into that of an ass, yields the play’s foremost example of the contrast motif.

A young man of Athens, in love with Hermia. Lysander’s relationship with Hermia invokes the theme of love’s difficulty: he cannot marry her openly because Egeus, her father, wishes her to wed Demetrius; when Lysander and Hermia run away into the forest, Lysander becomes the victim of misapplied magic and wakes up in love with Helena.

A young man of Athens, initially in love with Hermia and ultimately in love with Helena. Demetrius’s obstinate pursuit of Hermia throws love out of balance among the quartet of Athenian youths and precludes a symmetrical two-couple arrangement.

Egeus’s daughter, a young woman of Athens. Hermia is in love with Lysander and is a childhood friend of Helena. As a result of the fairies’ mischief with Oberon’s love potion, both Lysander and Demetrius suddenly fall in love with Helena. Self-conscious about her short stature, Hermia suspects that Helena has wooed the men with her height. By morning, however, Puck has sorted matters out with the love potion, and Lysander’s love for Hermia is restored.

Hermia’s father, who brings a complaint against his daughter to Theseus: Egeus has given Demetrius permission to marry Hermia, but Hermia, in love with Lysander, refuses to marry Demetrius. Egeus’s severe insistence that Hermia either respect his wishes or be held accountable to Athenian law places him squarely outside the whimsical dream realm of the forest.

The heroic duke of Athens, engaged to Hippolyta. Theseus represents power and order throughout the play. He appears only at the beginning and end of the story, removed from the dreamlike events of the forest.

The legendary queen of the Amazons, engaged to Theseus. Like Theseus, she symbolizes order.

The overconfident weaver chosen to play Pyramus in the craftsmen’s play for Theseus’s marriage celebration. Bottom is full of advice and self-confidence but frequently makes silly mistakes and misuses language. His simultaneous nonchalance about the beautiful Titania’s sudden love for him and unawareness of the fact that Puck has transformed his head into that of an ass mark the pinnacle of his foolish arrogance.

A carpenter and the nominal leader of the craftsmen’s attempt to put on a play for Theseus’s marriage celebration. Quince is often shoved aside by the abundantly confident Bottom. During the craftsmen’s play, Quince plays the Prologue.

The bellows-mender chosen to play Thisbe in the craftsmen’s play for Theseus’s marriage celebration. Forced to play a young girl in love, the bearded craftsman determines to speak his lines in a high, squeaky voice.

The tailor chosen to play Thisbe’s mother in the craftsmen’s play for Theseus’s marriage celebration. He ends up playing the part of Moonshine.

The tinker chosen to play Pyramus’s father in the craftsmen’s play for Theseus’s marriage celebration. He ends up playing the part of Wall, dividing the two lovers.

The joiner chosen to play the lion in the craftsmen’s play for Theseus’s marriage celebration. Snug worries that his roaring will frighten the ladies in the audience.

Theseus’s Master of the Revels, responsible for organizing the entertainment for the duke’s marriage celebration.

The fairies ordered by Titania to attend to Bottom after she falls in love with him.

Tech begins February 22. There are 4 performances between March 2 and 4.

A poignant and funny play about the ways, both sudden and slow, that lives can change irrevocably,” says Variety. After Callie meets Sara, the two unexpectedly fall in love. Their first kiss provokes a violent attack that transforms their lives in a way they could never anticipate.

Callie works as a traffic reporter in New York City, where she has lived for eleven years. Callie helps Sara learn her way around the city, and, in the process, develops strong feelings for her. When Callie and Sara are attacked, Callie sustains only minor injuries and, along with Peter, nurses Sara back to health.

Sara, who recently moved to NYC from St. Louis to accept a teaching fellowship at an elementary school in The Bronx, looks to Callie to learn how to fit in while in the Big Apple. When Callie and Sara are attacked in the park after their first kiss, Sara is injured, and falls into a coma, where she remains for some time.

George is Callie's "friend with benefits." He works as a bartender in the city, and is jealous of Sara's relationship with Callie.

Peter is Sara's ex-boyfriend from St. Louis. Once he heard Sara was in the hospital, he came down to New York to see her. Peter is still in love with Sara.

Mrs. Winsley is a witness to the attack against Sara and Callie. She is interrogated by Detective Cole. The actress who plays this role usually also plays the part of Sara's nurse. 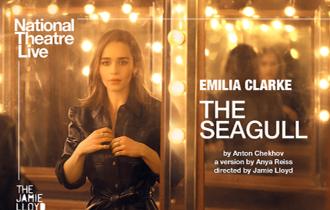