REGISTER NOW for the FREE event held on Saturday, January 7, 2023, starting at 10:00 am in the MCC Music Building. Pre-registration is not mandatory. On site registration begins at 9:30 am.

The event is FREE to all High School flutists. 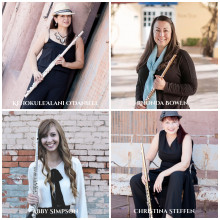 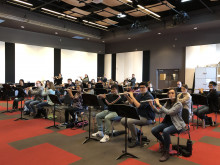 Kehokule’alani O’Daniell is a flute instructor, band/general music/choir teacher, and performer in Mesa. She graduated with her Bachelor’s in Music Education and Master’s in Flute Performance Pedagogy from Arizona State University where she studied with Dr. Elizabeth Buck. She has performed, adjudicated, and worked with many flautists around the valley including Desert Echoes Flute Project, Alla Breve, Paradise Valley Flute Choir, and the Arizona Flute Society. She has performed for the Hanson Brothers, at the Phoenix Theatre Company, directed a flute choir for ZooLights for several years, and has been a clinician and an adjudicator for the Arizona Flute Society. Kehokule’alani was a founding coach/clinician for the MCC Summer Flute Project and is excited to return as Artist Faculty in 2023. She is passionate about working with other musicians to find their inspiration and determination in becoming better players.

Abby Coffey is a versatile flutist, piccoloist, and music educator in the Phoenix metro area. A sought-after orchestral piccoloist, Abby currently holds the Flute 2/Piccolo position in the Symphony of the Southwest, and performs frequently as a substitute musician with The Phoenix Symphony. She formerly held the Principal Flute position in the Nashville Cinematic Orchestra. She has also appeared with the West Valley Symphony, Nashville Ballet Orchestra, and Arizona Opera Orchestra. Abby won first prize in the 2019 National Flute Association’s Piccolo Orchestral Audition and Masterclass Competition, and was twice a finalist in the Nashville Philharmonic Orchestra’s Orchestral Solo Competition.

A supporter and advocate of music education, Abby is currently the Adjunct Flute Professor at Arizona Christian University, where she also teaches music education and pedagogy courses She has also been a preschool music teacher, the Flute and Oboe Teaching Artist and Arizona School for the Arts, and a general music and elementary band director in Mesa Public Schools, all while maintaining a robust, successful private flute studio. Abby graduated Summa Cum Laude from Belmont University with a Bachelor of Music in Music Education where she studied under Dr. Carolyn Totaro, and holds a Master of Music in Flute Performance from Arizona State University, studying with Dr. Elizabeth Buck. Other influential mentors include Paul Thompson (Southeast Missouri State University), Brian Gordon (The Phoenix Symphony), and Nicola Mazzanti (former Solo Piccolo of the Maggio Musicale Fiorentino Orchestra).

Christina Steffen enjoys a diverse music career as a musician and educator. She has performed in the U.S. and Europe and at many music festivals including the International Low Flutes Festival, Abiquiu Chamber Music Festival, Music on the Rocks Music Festival, Chaparral MusicFest, and the Red Rocks Music Festival. She was the soloist for the world premiere of Freedman’s “On the Other World” for alto flute and flute choir at the 2012 National Flute Association Convention and gave the southwest premiere of the Bohmler Sonata célèbre in 2011. Her unique artistry melds pure classical and orchestral training with a jazz sensibility shaped by years of playing in Big Bands. This combined with a passion for the musics of the world has fashioned a uniquely versatile musician. She has played with local pit orchestras for over 50 national Broadway tours including “Wicked,” “Phantom of the Opera,” “Mary Poppins,” and “Aladdin,” plays regularly for The Phoenix Theatre Company, and has played for an extensive list of international entertainers such as Hugh Jackman, Bernadette Peters, Patti Lupone, and Natalie Cole. She has played extra/subbed with The Phoenix Symphony and played with many ad hoc orchestras, and various chamber ensembles.

Christina’s other musical forays include regional and national commercial recordings (HBO, United Way, PBS), playing for several CDs, and releasing the album, “Paradisa!” featuring the flute, piano, cello trio. She received her BM and MM in Flute performance from the University of Arizona School of Music and has taught at several music camps including the NAU Curry Summer Music Camp, the MCC Summer Music Camp, the SCC Music Camp, and the AFS Flute Camp which she initiated and was the Academic Director 2008 – 2015 while also acting as an ensemble coach and clinician. She teaches flute at Mesa Community College and is the founder and Artistic Director of Desert Echoes Flute Project, an internationally recognized flute choir program sponsored by MCC. She is also the director of the Summer Flute Project, AZ FluteFest, All-Arizona Flute Choir, and the Flute Regional Etude Day. Christina was most recently invited to direct the National Flute Association’s competitive High School Flute Choir at the 50th Anniversary Convention in Chicago.