Using the Five Star Chapter Development Plan as a guide to success, chapters can enhance their working relationship with the college administration by becoming active on the campus and in the community. 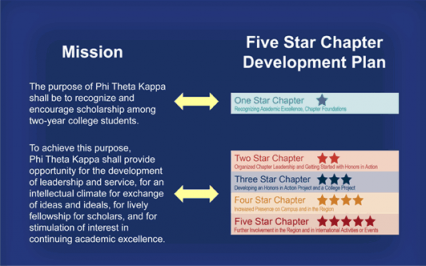 The chapter can work on multiple levels of the Five Star Chapter Plan at the same time. The chapter should complete the following requirements at the One Star Level:

1. Organize a membership recruitment campaign. Campaigns should include but not be limited to: creating awareness of Phi Theta Kappa on campus among students and faculty, inviting eligible students, conducting informational meetings about benefits, holding an induction ceremony, and reporting members. Chapters are encouraged to allow online membership acceptance. Visit the membership campaign website for additional resources. (Updated by Headquarters when inductees accept online or are reported in 2015.)

2. Submit the Chapter Annual Report to Headquarters. The report was emailed to all contact advisors in February 2015. (Updated by Headquarters after the report has been received and reviewed.)

3. Chapter's bylaws are approved and on file with Headquarters. (Updated by Headquarters if bylaws have been submitted and approved.)

3. Advisor reports new chapter officers for 2015. (Updated by Headquarters when 2015 officers are reported.)

4.Verify on the chapter directory that the college president, chapter administrator, and chapter advisor information is current, and report any changes.

5. Provide a structured orientation for new officers, advisors and committee chairs at the beginning of each academic term.

7. Chapter advisor(s) and chapter president each have the 2014/2015 Honors Program Guide.

8. At least two chapter members set research objectives and goals and conduct research for one theme of the Honors Program Guide, Frontiers and the Spirit of Exploration.

9. Chapter advisor(s) and officers meet with college president or other administrator to develop and discuss goals of the chapter.

Four Star Level-Increased Presence on Campus and in the Region

The chapter must fulfill all One Star, Two Star, Three Star, and Four Star Level requirements to reach the Four Star Level. Activities may be completed in any order.