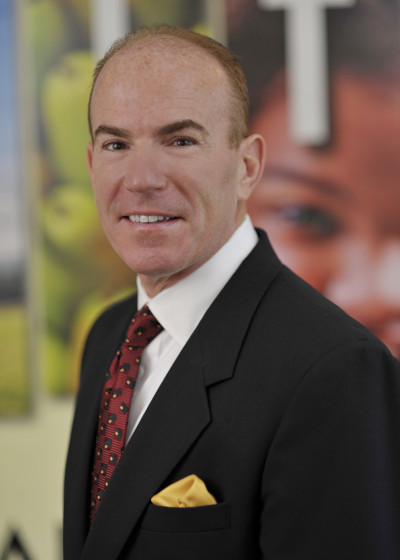 Karl Schroeder When Karl Schroeder’s post-high school plans to enter the Air Force in the late ‘70s didn’t work out, he found himself at Mesa Community College, wondering what his next step would be.

To cover expenses, he got a job at a Safeway grocery store and rode his bike seven miles to get to classes. Over the next few years, he earned an associate’s degree in business management at MCC (1987), a certificate in food industry management at University of Southern California, and a bachelor’s degree from University of San Francisco, all while working and raising a family.

Schroeder credits MCC with putting him on track to earn a bachelor’s degree and rise through the ranks in the food industry.

Today, as President of Safeway’s Northern California Division, he manages nearly 270 stores in California, Nevada and Hawaii. Schroeder serves on the Western Association of Food Chains (WAFC), whose mission is to raise funds for educational opportunities for Safeway employees.  As a speaker, he regularly shares his story as an example to others hoping to succeed in the industry. Schroeder points out the benefits of education and encourages employee growth.

“I had doors open for me in advance because of just the little education I had, which was an associate’s degree and a certificate,” Schroeder said.  “Plus, I picked up important skills I needed for the job. So, I tell them, yes you can be successful in the grocery industry without a degree, but why not get it and move maybe even faster than I moved?”

The most helpful aspect of his education at MCC was conquering math. His instructor assured him and others who admitted that they didn’t like math that he would change that mindset.

“I realized that there were basic formulas that I didn’t know and that I needed to build on,” Schroder said.  “People that know me today say that I’m an unbelievably analytical person. I learned at MCC that math was not only not a weakness for me, but a strength.  That probably changed the trajectory of my career. Getting the basics under my belt took the clouds away and let the sun shine through.”

Schroeder also found that the management concepts he learned at MCC helped him tremendously in his work life and still hold true today.

“Once I found myself in high level leadership roles, it absolutely rang true,” Schroeder said. “I reached back on those experiences a lot. It’s almost like doing the activity without realizing I needed the theory. I may have done some of that backwards!”

At Safeway, he works one-on-one with employees to help them meet their goals. He enjoys giving back, imparting knowledge he has learned over the years and encouraging others to take that first step by just taking one college class.

“I would have not gotten into USC if I had not stepped back and received the benefits of the building blocks at MCC,” Schroeder said.  “That education not only helped my career, but I learned a lot as well. It’s not just that I had the piece of paper, I learned so much that has helped me.”