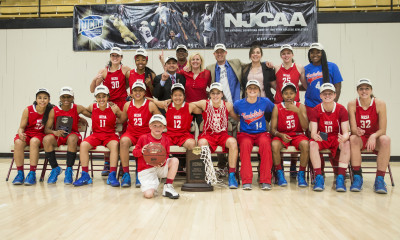 The Thunderbirds captured the NJCAA Division II national championship with an 82-72 win in overtime over second-seeded Highland (Kan.).

The victory capped a fantastic career for the MCC sophomores who posted a 55-12 record over their two years, won two Region I titles, took second place nationally in 2013 and capped it all with a national title in 2014.  And the coaching staff, head coach Kori Stephenson and assistants Sam Stevens and Ben Nelson, reached the pinnacle after taking teams to fifth, second and first place in the nation over the past three seasons.

For the school itself it was the 17th national crown in now eight different sports, but the first since 1980. Women's basketball is the eighth to join the list.

Many Thunderbird teams and athletes enjoyed stellar seasons this year.  The Annual Awards Banquet honored the top athletic achievements.  Among the honorees:

For a full summary of winners, visit athletics.mesacc.edu/all-sports/annual-awards-banquet-honors-top-mesa-athletic-achievements.

Interested in staying up to date on MCC Athletics?  Visit athletics.mesacc.edu.