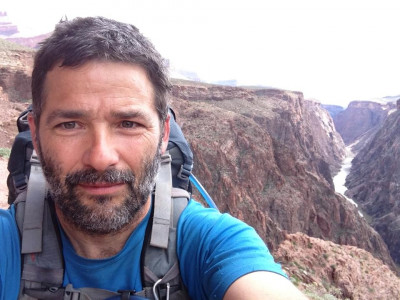 Andrew Holycross When MCC biology professor Andrew Holycross emerged from Pearce Ferry Wash in the Grand Canyon on Nov. 25, 2013, he became the third person to have hiked the length of the Grand Canyon on both sides of the Colorado River. The 65-day journey in extremely rugged canyon country on the north side began on Sept. 22, when he set out to accomplish his sabbatical goal of exploring the modern relationship between man and wilderness.

Andrew, joined in stretches by friends and fellow Grand Canyon enthusiasts, completed the entire 500-plus-mile hike of the north side in a single trip, making him the ninth person to complete a through hike. He had completed sections of the south side previously. Successfully completing the hike enables him to deepen public understanding of wild places and how these places preserve a context within which individuals can challenge themselves in nature.

To further enhance these goals, Andrew walked in the footsteps of Robert (Eschka) Benson, an immigrant from Germany who walked both sides of the river through Grand Canyon in 1983, only to die within a year of completing this accomplishment. Andrew’s hope is that his experience and Benson’s story, largely unknown, will provide inspirational insights into the value of wilderness and personal challenge.

Highlights from the trip, including the government shutdown
“It was a pretty amazing trip,” Andrew said. “I came away with a feeling of being part of nature. A lot of people look at a trip like this as Man vs. Nature, but I didn’t feel that way. After the first week of not being in good physical shape, then it felt good. I like being outside. I felt at home. I didn’t miss the creature comforts of bed and clean sheets and I was warm enough. You notice the changes as days, seasons, and weather move in and out. It’s nice to adjust to the rhythms of nature, instead of the rhythms of traffic and clocks and schedules.

“This is the longest hike I’ve ever done. It was a little overwhelming thinking about it. I thought about the things that could happen; possibly breaking an ankle, all sorts of things. I missed home, but I adopted a ‘one day at a time’ motto.  The hardest part of the trip was being away from my fiancé, Sonya, and son Canyon, 15.”

One potential obstacle he faced was the government shutdown from Oct. 1-16, which closed all national parks.

“I received a text by satellite communication about the shutdown,” Andrew said.  “I talked to friends and I knew the park rangers weren’t coming to get us, but I thought when we reached Phantom Ranch, one-third of the way through, that they might ask us to leave. We had to stop there because there was a food cache inside the ranger’s cabin.

“Also, Sonya and my sons Dylan and Canyon were supposed to hike down to Phantom Ranch and bring my cold weather gear. In September when I left, it was so hot, but come October, it was getting pretty cold at night. I had a 45 degree sleeping bag and a light jacket, but not much cold weather gear at all. All of that was supposed to get hiked down to me and now, nobody can get in the park. For a few days I was resigned to the fact that we’d just keep hiking to Phantom Ranch and hopefully the shutdown would end before we got there. If it didn’t, then we were out”.

“A couple of days before we got there, the closure was still in effect with no signs of it letting up. We got word that there was some high level meeting and one of the things addressed was, ‘what are we going to do about these guys hiking the length of the canyon?’ I guess several people at the meeting argued that as a matter of principle we should be allowed to continue because the river raft trips that were launched prior to the closure were being allowed to continue, and the policy should be the same for all park users”. 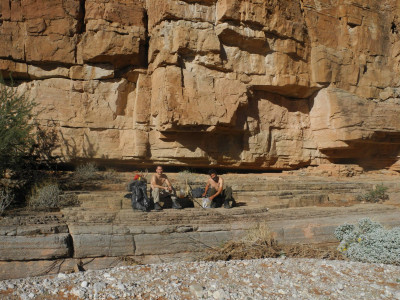 “In the end, we hiked into Phantom Ranch, knocked on the ranger cabin, and two cheerful rangers greeted us, gave us our stuff and the park service had actually delivered my cold weather stuff for me, by mule. I think the park did absolutely the right thing and government agencies don’t always do that!”

Physical/spiritual aspects
“Every day had highlights, like finding rock art in the middle of nowhere that was drawn by people before the birth of Christ,” Andrew said. “Some of the images are just ghostly. There’s absolutely some spiritual significance to them.”

“Because our route was at many different levels of the canyon, sometimes on the river, sometimes up a side canyon or down a slot canyon, or along these sort of shelves in the canyon, it was incredibly varied. You go from the intimacy of these confined little pockets that are hidden throughout it and then BAM! You’re up in this enormous open space an hour later.  There’s no sign of people out there; it’s true wilderness.”

Observations he’ll share with students
Andrew’s expedition will enable him to bring firsthand knowledge to his students, adding to his dynamic style of teaching. Students at the college are excited to hear first-hand details of the discoveries made in the remote areas of the canyon.

“He is one of the most observant people I have ever met,” said Andy Baldwin, the Chair of MCC’s Life Sciences department. “The story of this journey alone will inspire former, current and future MCC students and staff for years to come.”

Andrew said he will share some of what he learned about the geology and biology of the Grand Canyon, but more than anything else, he will try to convey to them is how important it is to have a big goal like this.

“It doesn’t have to be this kind of adventure, but I’d like students to know how important it is to take time for these kinds of events in their lives and to do it early if they can,” Andrew said.  “Don’t wait, because many people won’t have the time later in their careers. They’re going to have kids and jobs that won’t allow it. Go to Nepal, go to Africa. Go to museums in London or Paris or do whatever your thing is. Do it and do it when you have the time to do it. Sign up for study abroad programs. If it’s expensive, get a credit card! Pay for it later.”

Personal Growth
Andrew’s project is also tied to the grieving process following the loss of his wife, Ioana Elise Hociota. Ioana slipped and fell from a cliff on a backpacking trip in a remote area of the Grand Canyon. Ioana was an extremely accomplished Grand Canyon backpacker and not one to take unnecessary risks. The weather was perfect and the exact circumstances of her fall, unwitnessed by her hiking partner, may never be known.

Andrew writes, “Some wonder why people engage in adventurous activities considering that some level of risk is inherent in adventure. I’ve spent a lot of ‘canyon time’ trying to think about this from Ioana’s perspective. I know her as well one person can know another and I believe what she told us through her example, is that what matters most is not how long you live, but how well you live. And ‘living well’ means throwing your heart and shoulder into both the work and play of life. Ioana was one of those amazing people who felt an obligation to challenge herself, even when she was at play.”

Andrew, who describes Ioana as someone who could not understand the concept of “quitting,” said she was with him when things got tough.

“I’d hear her talking and think, ‘alright, I’m not quitting,’” Andrew said. “She inspired the hike, and motivated me to finish it. I think, the more I look around, that there are people who go through grieving and pain in life and turning to nature offers some peace or release, inasmuch as that is possible.”

Watch the final leg of Andy’s journey below.