From MCC to a Dream Job: A Non-Traditional Path 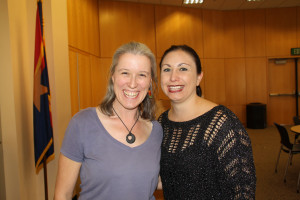 Harmony Colella’s “fascination with destruction” began when she was seven years old. Living in California at the time, she remembers hearing a loud noise and feeling the ground shake. Colella reports that she wasn’t frightened, in fact, she found it extremely interesting. Her mother yelled to her to get underneath the door for safety. When it was over, they surveyed the damage. The earthquake left a large crack in the pool.

“I remember thinking, wow, there’s a phenomenon that did this,” Colella said.  “Something happened that destroyed our yard.  From then on, all I ever wanted to study was earthquakes.”

But she didn’t know how to academically accomplish that.  Her family moved to Arizona and soon she was a top student at Highland High School in Gilbert. She didn’t take any earth science classes because “all the smart people took biology.” She decided to be a civil engineer so that she could learn to build structures to withstand earthquakes. Colella graduated early and took several classes at Mesa Community College before transferring with a full ride scholarship to Arizona State University.

“By the second year, I realized how much I hated engineering,” Colella said.  “I did really well, but the material was boring and the professors were not engaging.”

So with her grades slipping, she asked a professor in the ASU geology department how to make a career studying earthquakes. He told her to become a geologist. At last, at age 20, she felt she knew where she was headed.

Then, to the astonishment of her friends and family, Colella decided to take a break and completely quit school.  She knew she would go back to school eventually, but first she worked at some menial jobs and then moved to California. There she found full time work as an accountant and started taking classes at a community college in accounting.  But her interest in geology continued and led her to enroll at California State University, Fullerton.

“By then I was 24 years old and finally got to work on some earthquake projects,” Colella said.  “It was hard.  I had a lot of classes that didn’t transfer and I had to take some classes with 18-year-olds, but I made a deal with myself that I would be done with my bachelor’s degree by age 25.”

She received her bachelor’s degree in geological sciences on her 26th birthday and, after a hard decision-making process, went on to enroll at University of California, Riverside for graduate school. She set another goal: to finish her Ph.D. by age 30.

“Graduate school was the worst and the best time of my life,” Colella said.  “I worked hard, but didn’t really know what I was doing. The first three years of my Ph.D. I was scared to death of my advisor because he was so famous in our field, but he was the nicest guy. The worst day was when he told me I really should be a lot further along.”

Again, she thought about quitting, but dug in her heels and came up with a solid research project on earthquake processes in subduction zones and volcanic environments.

“I started studying slow slip events, a very new phenomenon that very few people had studied,” Colella said.  “I was really excited about the research.”

Six months later she realized she was on to something when she went to a geology conference in Portland and experts in the field now asked her questions about her research and she was able to provide all the answers. Colella calls this her “coming out party,” an experience that was both scary and overwhelming.

Colella spent the next year writing papers and finishing her Ph.D. She earned her Ph.D. by age 31. During this time, she traveled extensively, something she never got to do as a kid, to Australia, Hawaii, Costa Rica, and New Zealand.

After graduating, she worked for a time as a petroleum geophysicist at ExxonMobil, where she made an excellent salary, but she knew the job was not a good fit.

“It just wasn’t for me,” Colella said.  “But the take away was that now I know I’m a scientist.”

She recently received a prestigious National Science Foundation Grant and is now an NSF Postdoctoral Research Fellow at Miami University in Ohio. The award is based on drive, enthusiasm and scholastic achievement.

Her work on slow slip events is a big step toward forecasting earthquakes. Colella is one of only a few people with this expertise and her research is expected to have a huge societal impact.

Kaatje Kraft, a geology professor at MCC, met Colella at a geology conference and asked her to return to MCC to explain her non-traditional career path to students. Her speech inspired several students in the audience.

“I like to tell students that you don’t always have to know what you’re doing,” Colella said, laughing.  “Don’t be afraid to change direction. You can change your mind along the way. It helps to set goals but be flexible.

“I’m so happy now, I love my job,” said Colella, a self-described ‘rock star.’  “Every day I get to do what I love and travel and see the world.  Someone pays me to study earthquakes.”