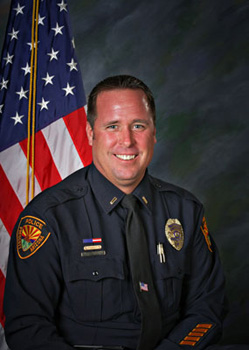 Reinhardt began attending Mesa Community College as a senior in high school. After receiving an associate’s degree at MCC, he went on to earn a bachelor’s degree at the University of Phoenix and is now working toward completing a master’s degree. He is also a graduate of the FBI National Academy.

Reinhardt said he knew early on that he wanted to pursue a career in law enforcement.

“When looking at a career in law enforcement, I saw that every day was a different day,” Reinhardt said.  “That appealed to me … and the career ended up being what I liked.”

His experience at MCC has helped him in his career.

“A lot of my instructors were working in the same field,” Reinhardt said.  “As a young student I didn’t understand the importance of networking, but the connections did help.”

Reinhardt said he is enthused about his new position as Deputy Chief.

“My goal is to continue the progression of the Prescott Police Department, especially as technology advances,” Reinhardt said.  “I think it’s important that an organization does not become stagnant.”

In addition to his employment with the PPD, Reinhardt is a member of the International Association of Chiefs of Police and the 100 Club, which is a non-profit that provides financial support to families of officers during times of tragedy.

For Reinhardt, his career choice has been a satisfying one. He shared this advice for young people considering a career in law enforcement:

“I believe education is important, which is why I’m working to complete my master’s,” Reinhardt said.  “Also, I’m not convinced young people know the importance of networking, but I believe it is very important.”