Transforming a Light Station Into an "On Ocean" Tech Center 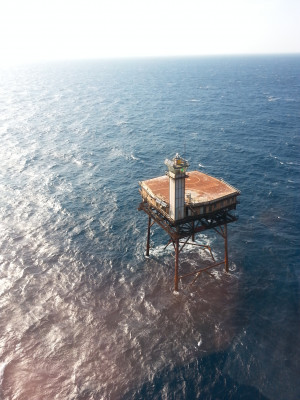 Thirteen miles from shore and 120 feet above the water, Diamond Shoals Light Station (DSLS) soars above the Atlantic. The sound of wind and picturesque views envelop visitors.

It was not the serenity, however, that attracted MCC Alumnus and Zap Water Technology, Inc. President Dave Schneider to the decommissioned Coast Guard Light Station – it was the possibilities.

“I’ve already been approached by scientists who want to monitor bird and moth migration patterns, a group interested in doing

The adventure began in 2012 when Zap purchased the tower for $20,000 through a government auction. Zap plans to use the station to enhance existing and develop new products in its ElectroChemical Activation (ECA) line of sustainable, non-toxic cleaning and sanitizing agents.

But that’s just the beginning. Dave is seeking partners with similar goals – those committed to clean water and sustainable power sources like wind, ocean, and solar. DSLS also offers great opportunities for product testing and development in a marine setting as well as a venue for scientists to conduct studies.

“This will be a unique, one-of-a-kind place to do some very important work in a very inspiring setting!" Dave said.

Recreation is also on the list. “We are hoping to be a stopping off point for many of the fishermen, sailors, boaters, divers, and kayakers that frequent this area,” Dave said. The sunrises, sunsets, sea life, and star gazing create an ethereal environment. “It’s almost a religious experience.”

Put into service in 1966, the U.S. Coast Guard used DSLS until 2001. In an area off North Carolina’s Outer Banks region, known as the Graveyard of the Atlantic due to the more than one thousand documented shipwrecks, the Coast Guard had on-site teams in place until 1979 when the light was automated and only needed occasional service. The light station was decommissioned in 2001 due to the widespread use of GPS technology and sat vacant until Zap’s purchase in 2012.

Although structurally sound, the station requires extensive restoration from the bottom staircase that provides boat access to the helicopter pad. Hoping to achieve the bulk of the work through partnerships and volunteers, the DSLS website lists a number of opportunities, both on land and on the ocean.

A tireless professional, in addition to pursuits related to DSLS and Zap, Dave is the Chief Financial Officer at St. Croix Promotions Retail, which provides promotional items and online stores to businesses such as Best Buy, Medtronic, and Blue Cross Blue Shield.   He received his associate’s degree from MCC in 1978 and transferred to ASU where he earned his bachelor’s degree in accounting to become a CPA.

“I was the first in my family to attend college,” said Dave. “I worked full time and attended school full time. MCC prepared me well and provided a good bridge to ASU. I would have gotten lost if I’d gone directly to ASU.” 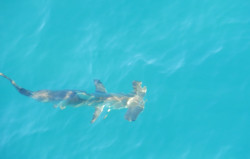 The tie that binds his seemingly disparate professional pursuits together is sustainability. While not over zealous, Dave is committed to living a sustainable lifestyle, trying to have the least amount of impact on the environment as possible and reusing and recycling.

“In reality my CFO job is my chosen profession – it pays the bills,” Dave said. “Zap is my passion and Diamond Shoals is obviously another passion. It fits many of my ideals to reuse, and is just dam cool.”