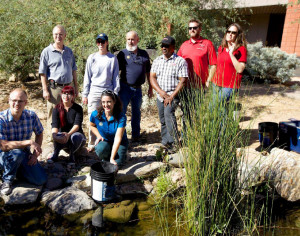 MCC's cienega became home to 285 endangered Gila Topminnow in the summer of 2016 through a collaboration with the Phoenix Zoo and Arizona Game and Fish Department (AZGFD). They joined the protected Lowland Leopard frogs, which have bred successfully after being added to the cienega last year.

This isn't the first time endangered species have been released into the cienega. In 2014, 300 endangered, native desert pupfish were released by the AZGFD into a refuge pond in the cienega. Partners for that project included AZGFD, U.S. Fish and Wildlife Service, and the Phoenix Zoo.

The cienega now includes two species of endangered fish, an endangered plant species, and several other species of protected reptiles and amphibians.

In addition to being an elite ecology experience, the endangered fish release allows students to interact with wildlife professionals and participate in activities that highlight careers in science.

“This new signage explains the importance and functions of cienegas, all of which can and will be incorporated into classroom curricula,” said Andy Baldwin, MCC Life Science Department Chair. “The wonderful thing about the cienega is that it also supports MCC’s commitment to offering research experiences,  the ability to collect data on rare habitats, and observe endangered plants and animals, all of which are rare opportunities for undergraduate students.”

What is a Cienega? 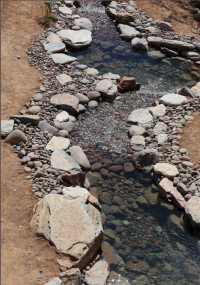 A cienega is a spring that is usually a wet, marshy area at the foot of a mountain, in a canyon, or on the edge of a grassland where groundwater bubbles to the surface. Often, a cienega does not drain into a stream, but evaporates, forming a small playa. Because evaporation usually causes the water to be alkaline, vegetation around a cienega commonly includes halophytes, including many unusual, rare, and endangered species of plants and animals. 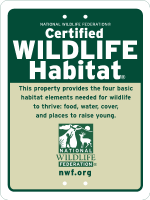