T-Bird sports are back!

Select MCC sports were able to practice and compete earlier this year. The sounds of our fans cheering on our T-Birds were among the welcomed signs of returning to a normal collegiate life on campus.

“It was great for fans and our student athletes when we were able to have spectators at our games this spring,” said John Mulhern, MCC athletic director. “Because of the success we’ve had navigating safety protocols in our athletic program, we are planning to be full steam ahead with all our teams next semester. We’ve just begun signing some great student athletes for fall.”

MCC T-Birds achieved remarkable successes this past semester, especially notable because it was accomplished during the pandemic. 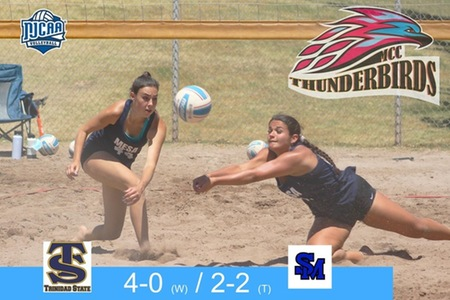 Alyssa Barbagallo (right) dives for the return with backup from Maggie Scranton
Here are some highlights:

Women’s beach volleyball, new to the MCC team rosters this spring, ended their first official season of competition by winning their final match of against South Mountain, 3-1 achieving a 4-0-1 record for the season.

The MCC track & field teams wrapped up their 2021 season on the final day of the NJCAA Outdoor Championships. The women’s team finished seventh in the team standings, while the men’s team finished 16th. The women edged out Central Arizona College by three points to be the highest ranked ACCAC & Region I team in this year’s final standings. Fourteen athletes garnered All-American honors, with each of them placing within the top 8 of their respective events. Mary Siml won the 3,000-meter steeplechase with Ellis Collins taking second. MCC has an incredible total of 886 All-Americans in its track and field history. Siml is our 98th individual national champion.

The women’s golf team tied for 9th place at the NJCAA Women’s National Championship, finishing in the top 10 in the nation for the 15th time in the past 20 years. Alyzzah Vakasioula tied for fifth place individually and earned First Team All-American honors.

The men’s golf team finished in third place at the Region I, Division II championship.

The men’s tennis team clinched the 2021 ACCA Region 1 title for the seventh consecutive year and placed 12th at the NJCAA National Championship, their 10th straight year finishing in the top 20 in the nation.

T-Birds men’s baseball team finished the regular season with a 25-23 overall record and finished third in the Region I, DII Tournament. Three MCC players earned post-season awards from Region I and ACCAC baseball. Team captain Josh Leslie earned a spot on the Region I - DII 1st Team; Zach Wagner and Lucas Danielewicz on the Second Team.

Interested in cheering on your Thunderbird teams? Rosters and schedules are available at MesaTbirdSports.com.