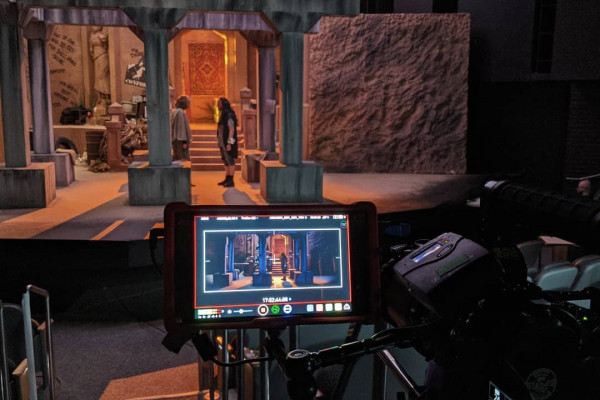 MCC put the Ancient Greeks together with today's technology for a brilliant pandemic solution. Image by AJ Young.
In an exciting and creative response to a pandemic challenge, the MCC Communication, Theatre & Film Arts Department took requirements to wear masks and perform without a live audience, and produced the college’s first feature film, “Antigone.”

Theatre Program Director Kevin Dressler said, “We knew we were going to be wearing masks and thought - the Greeks wore masks - so this was the perfect pandemic play. One of the most interesting aspects is the serendipity that occurred because we had to do things differently due to the pandemic.”

Dressler said ultimately it was a team of academic educators who took pandemic lemons and collaborated to make magic. The play evolved into making a movie that brought together MCC students, faculty, and alumni who are currently professionals in the film and theatre industries.

He explained the initial plan was for a Zoom presentation with an audience in fall 2020. But as COVID-19 continued to prohibit audiences, MCC design and production faculty member, Kara Thomson, suggested filming and contacted one of her former students, AJ Young, a 2010 MCC graduate whose LA cinematography career includes being the director of photography for a number of feature films and music videos.

“AJ said it ‘sounded awesome’ when we asked,” said Dressler, “I’ve directed probably 80 stage productions but never a movie. AJ was able to take the ground plan of our set and turn it into a 3D computerized image that you could walk through.”

With the 3D stage, characters were added and, instead of a traditional story board, camera angles were inserted in the script so the 95-minute show was able to be shot in 10, six-and-a-half-hour work days. Typically, it would take three or four weeks with months in post production.

2010 alum Travis Marsala was tapped as associate director and stepped up to direct parts of the show. Marsala works in Chicago as a screenwriter, director, and is an accomplished puppeteer and cartoonist. Four additional alumni brought their professional expertise to the film: Sean McBride, Billy Jones, Jason Kleinschmidt and Kristi Quiroz Kleinschmidt.

“Travis directed the Chorus and what I think is the best scene in the play, that between Creon (Antigone’s uncle) and his son Haemon (Antigone’s fiancée),” said Dressler.

Eleven student actors and nine student designers contributed to the project, gaining new experiences and valuable networking, which now reaches into the movie and entertainment industries.

“This was a great learning experience for our students who usually just learn the craft of stage acting,” said Dressler. “Having the opportunity to be involved in an actual film production with a shooting schedule and modifying their skills for film was tremendous.”

After online rehearsals, filming commenced in February 2021 on the MCC Southern and Dobson Campus. The film was streamed virtually in six showings in April 2021, featuring two drive-in showings for the premier. The good news is there will be another opportunity to see the film.

As a testament to its entertainment quality, “Antigone” was selected into the prestigious Phoenix Film Festival as a Showcase Feature Film. It is scheduled for showings on 7:45 p.m., Aug. 16 and 9:05 p.m., Aug. 19 at the Harkins Theaters Scottsdale 101. Order tickets and find more details at phoenixfilmfestival.com or call 480-513-3195.