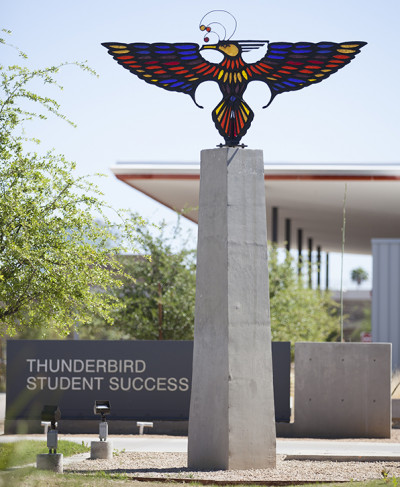 The Thunderbird now stands east of the clock tower along the main east/ west pedestrian walk.
When it was first constructed, MCC’s stained-glass Thunderbird was a colorful beacon greeting travelers at the corner of Southern and Dobson.

A gift from the class of 1978, it was a work of art celebrating a new athletic mascot. The MCC Thunderbird was a silent sentinel to progress and growth all around it. The corner of Southern and Dobson became an even busier intersection over the years.

The Thunderbird had endured more than 36 years, bravely standing through the worst dust, sand, rain, wind and lightning the elements could muster. But as the years passed, vegetation overtook its base and its profile shrank as construction hummed around all four corners of the intersection. 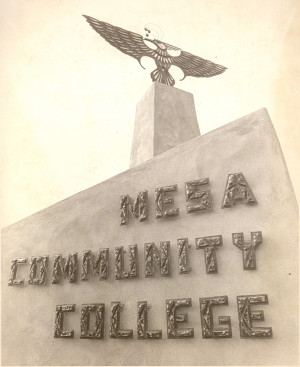 Then came the thunderstorm of August, 2014. A fierce blast from the sky toppled the statue, though luckily it did not fall to the ground. It was found lying horizontally on top of the base, its bracket mounting bent but not broken. A student government project in 1978, it became a student repair project in 2015 when welding students helped return the Thunderbird to its prior glory.

Rather than fix the Thunderbird on site, MCC decided to move the statue to a place of more prominence on the Southern and Dobson Campus. It was repaired and cleaned, and on April 27 of this year the iconic bird was rededicated at its new location near the new Enrollment Center and Thunderbird Success Center. 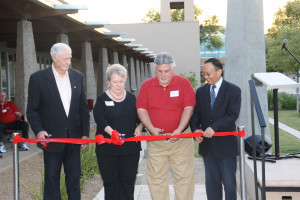 Theo Heap, Barbara Thelander, David Paolini and Shouan Pan cut the ribbon at the rededication. Paolini said student government members visited other community college campuses in the Maricopa County Community College District at the time and realized MCC “was the only campus without an identifying sign.” The student body voted for Sharon Self’s design, and it was approved by the District Governing Board. Architect Charles Hickman donated time and materials for the construction blueprints. 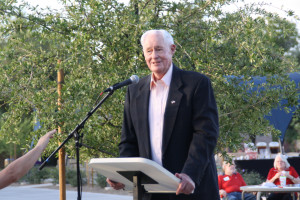 Heap was Associate Dean of Students and Athletic Director for MCC in the 1970’s. He said student government selected the original mascot, the HoKams, in honor of “the ancient Indian tribes that inhabited the Salt River Valley in antiquity.” But the college’s American Indian Club asked Heap to reconsider the mascot name because they believed it was demeaning. In an early stance of progressive leadership on such issues, Heap agreed. While current professional sports teams continue to clutch to their unflattering mascots, Heap proved to be decades ahead of his time. He changed the name to Thunderbirds, and the student body approved.

“Since that day the Thunderbird mascot has been enhanced and today is a beautiful rendition of this dynamic bird,” Heap said.

Originally constructed for $8,200, the T-bird was designed as a landmark for a then fledgling community college campus. Now standing in the eastern shadow of another campus icon—the clock tower—the MCC Thunderbird greets those coming and going from the athletic fields to the student center along the main east/west pedestrian walk that runs across most of the campus. 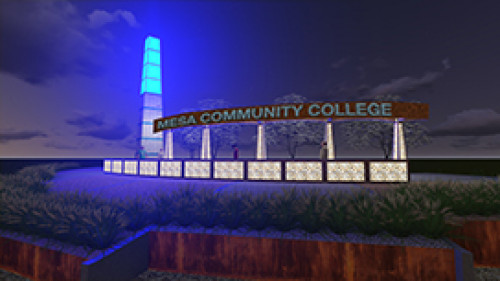 Rendering of the new monument sign at Southern and Dobson.
New monument signage consistent with other changes throughout the Fiesta District  will now grace the northwestern corner of the Southern and Dobson campus. But the MCC Thunderbird will live on in its new nest, soaring above the Thunderbird Success Center as an old beacon made new again, still inviting all to partake in its educational legacy of changing lives for the better and making dreams come true. 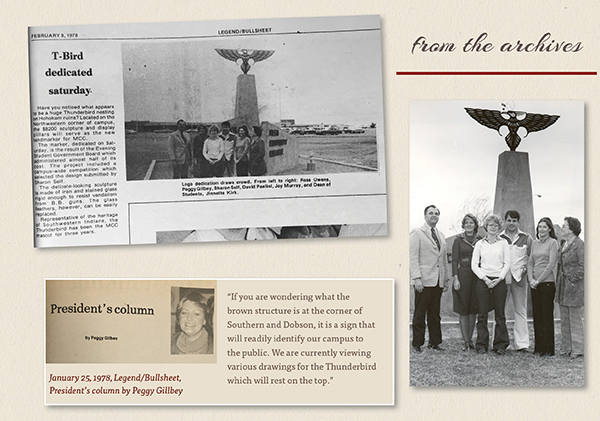 Excerpts from the MCC Archives.

Video footage related to this story: