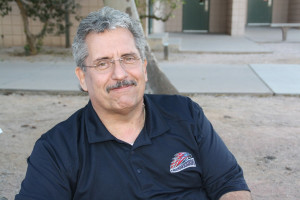 Spina bifida may have robbed Mesa Community College’s Tom Kusek of the ability to walk, but it couldn’t suppress his drive to succeed.

A 2005 graduate of MCC and now the college’s Disability Resources Manager, Tom was already walking with a cane at age 21. A birth defect where there is incomplete closing of the backbone and membranes around the spine, spina bifida affects up to 20 percent of the U.S. population, depending on the type of SB.

Tom has had 26 spinal cord surgeries, and in 1999 one that left him paralyzed from the waist down. A mechanical designer for 18 years in Pennsylvania, Tom and his wife Peggy, decided that he couldn’t “crawl and climb around in plants and take measurements with being in a wheelchair.” They moved to Arizona in 2000 when Tom found a job in robotics.

A love of music and audio production led him to MCC, where he excelled. He received both a vocational certificate and Associate of Applied Science degree in Audio Production Technology, and graduated with honors as he continued to assist students with disabilities. He went on to achieve a Bachelor’s degree in Management and then a Master’s Degree in Education from Ottawa University, and is currently in the dissertation phase of his Doctorate studies in Higher Education Leadership from Capella University.

Tom never talks about what he can’t do, only what he can. He co-designed a work station for students who were blind and low vision with Keith Heffner. He and Keith re-activated an MCC club for disabled students to learn alternative music technologies. Their latest project involved a music therapy type device and used SoundBeam technology with an Innovation Grant to add an alternate musical instrument to the Audio Production program. In his spare time, he volunteers for the Department of Arizona American Legion Baseball program as a commissioner and executive officer for the State of Arizona. He is also a member of Maricopa Veterans Education Taskforce for the District. He is also a past Commander of the Sons of the American Legion, Post 35, Chandler.

“It’s never stopped me,” Tom said of spina bifida. “In my job I help students, not to jump over obstacles but to go around them,” a humorous pun he uses to demonstrate his outlook on life. Kusek has been an active advocate for spina bifida patients since the 1980’s, and he’s works with homeless and disabled Veterans. He knew he found his calling when he counseled others, and says most of the time, fellow disabled people just want someone to talk to. “Often, they just want to talk, to get things off their chest.” When they see his disability, they seem to gain a level of comfort and are more open to talk about their own needs.

“I know the people here (at MCC) and this is my home,” he said of his fondness for his new job at MCC, which he started in March. “With every transition I’ve been through in the past 16 years, my MCC family has been with me.”