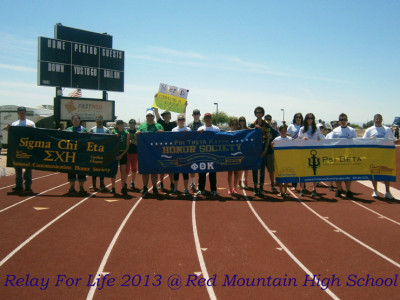 As MCC's Relay for Life team prepared for this spring’s 2013 annual American Cancer Society event in East Mesa, they set a goal: to exceed last year’s total of $9,000 in funds raised.

For several months, volunteers held pre-event fundraisers and watched in anticipation as the donations poured in. On the day before the event, they were close to their goal, but not quite there. Soon, though, word came from relay organizer Ed Lipinski.

"They did it,” Ed Lipinski reported. “They rocked the relay!”

More than 100 MCC students, faculty, staff and friends from both campuses worked 500 plus service hours to make it happen. They raised $10,300, making them Top Individual Fundraiser at the event and placing them in the Top 5 Fundraising Teams.

The MCC team joined over 4 million people in more than 20 countries who take part in this global event and raise much-needed funds and awareness to save lives from cancer.