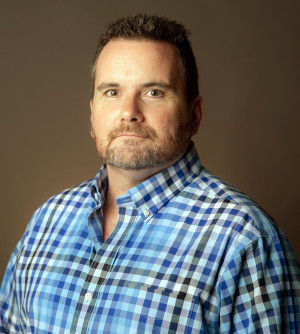 Tim Kaufman (2015) describes his teaching career as his “third act” in life.

The former costume designer’s journey in the fashion industry took him all over the country and eventually led him to Visual Merchandising roles in large department stores.

Tim first learned about costume design while working at a regional theater as a wardrobe supervisor. In this role he met many visiting designers and was able to inspect garments up close, piquing his interest in the differences between costume designs and regular clothing. The clothes have to be able to move well, last eight shows a week, and be able to be washed or dry cleaned frequently.

Eventually, a job in wig design led him to design shows for summer theaters, which eventually led to designing for shows at regional theaters across the U.S. After 14 years accompanying national Broadway tours of Cats, Wicked and other beloved shows, Tim retired from costume design and moved to Arizona for a fresh start, enrolling in an MCC Textiles class and Makeup for Stage and Screen class for fun.

Evonne Bowling, the program director of MCC’s Fashion Design and Merchandising program at that time and current faculty member, quickly became Tim’s mentor. After earning an associate’s degree in 2015, Bowling encouraged him to reach higher, which he did, earning a Bachelor’s in Design Studies from Arizona State University’s Herberger School in 2018.

A first-generation college graduate, Tim started his career in fashion merchandising working with well-known brands such as Nordstrom, Target and Saks Fifth Avenue.

Tim is passionate about the visual display aspect of fashion merchandising, and emphasizes that visual merchandising is more than dressing mannequins. The job requires understanding of consumer psychology and data analysis to inform merchandising teams on how displays should be set up, and the best way to move products throughout a store.

While serving on the Visual Display team at Nordstrom Scottsdale Fashion Square in 2018, Bowling asked him to return to MCC -- this time, as an instructor! Tim began teaching Visual Display and Merchandising and Fashion Merchandising that fall and has enjoyed the new teaching role for three years.

“It was so surreal walking into the classroom on my first day teaching and standing behind the instructor’s desk, staring at the chair I sat in for two years as a student,” said Tim.

Today, with the online sales market continuing to grow thanks to the rise of social media, Tim believes the future of fashion lies with e-commerce and that MCC students should be prepared to harness the power of online marketing. He is in talks with his MCC colleagues to develop an E-Commerce class that would train students on how to manage online businesses.

Tim’s dedication to his students was recognized in June 2021 when he received the MCC Outstanding Adjunct Faculty Award, highlighting his empathy for his students and working diligently to get to know them one-on-one.

Looking to the future, Tim aspires to become the program director of the MCC Fashion Merchandising & Design Department. 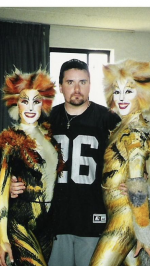 Tim encourages his students to gain real-world experience, work hard, and above all, value their education. “Make sure you stay in school. Earn your associate’s degree and don’t stop there,” he said. “Always be on time. Everything I teach my students has to do with the real world, and I want them to be prepared.”

Tim reiterates what his mentor and colleague Evonne Bowling told him as a student: “Your education can never be taken away from you.”