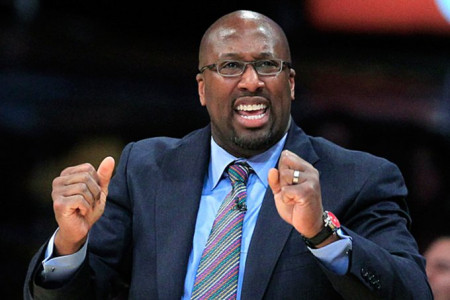 Mesa Community College alumnus Mike Brown (1988-1990) has experienced life on a global scale since childhood. His most recent international adventure was coaching the Nigerian national basketball team at the Summer Olympics in Japan and at the FIBA AfroBaskets 2021 championship tournament in Rwanda.

Born in Ohio and growing up overseas, Mike Brown was a star basketball and football player at the Würzburg American High School in Germany. His advanced talent in sports was noticed by former Arizona State University basketball player Ron Johnson, who was coaching a professional German team at the time.

“He invited me to come and play for the pro team,” said Brown. “Because I was the youngest player on the team, still in high school, he became like my uncle.”

Johnson had coached one of the Maricopa Community Colleges teams and put Brown in touch with MCC Coach Tom Bennett because he thought the college would be a good place for the young athlete. Brown says Bennett became a mentor and lifelong friend.

“I went to MCC to play basketball and because Ron Johnson said it was good fit for me to play there and earn a scholarship to a four year university,” said Brown. “And he had a lot of respect for Tom Bennett as a coach and a person.”

He added, “I loved the vibe of the campus. Everybody was friendly and extremely helpful. I truly believe that academics is as important as athletics at MCC and to be able to get support in both areas is something young men and women should want to strive for during their college careers.”

Brown earned a business degree from the University of San Diego and began his NBA career. Over the next decade he helped coach several teams, led the Cleveland Cavaliers to the NBA finals in 2007, was named NBA Coach of the Year for the 2008-09 season, and is currently on the lead coaching staff for the Golden State Warriors. The Nigerian Basketball Federation reached out to him in November 2019 to lead their national team to the Summer 2021 Olympics.

“I thought about it, and talked to people I trusted,” Brown said. “I was drawn to the opportunity to help a country like Nigeria and the continent of Africa as well as being head coach of an Olympic team. Also, I liked the vision the president of the federation spoke of and where he wanted the program to go. It was an experience it would have been hard to pass up.”

He volunteers to coach the team. There is no salary. In fact, out of his own pocket Brown bought practice jerseys and other equipment. He arranged travel, lodging and food logistics. Eventually, he created a nonprofit — Friends of Nigerian Basketball — and a GoFundMe page to help the team meet the costs of the Olympics and future games.

The team’s pre-Olympic win is the stuff of dreams and legends. At July’s Las Vegas demonstration games, Brown coached the Nigerian national basketball teams to a 90-87 upset over the superstars of Team USA.

“These were friendly games, they didn’t count on your record,” Brown explained. “But it was great. No African team has ever beat Team USA. To be able to accomplish that while getting this program going was something to grow on and be proud of for many years.”

On the courts after a 30-hour flight from the United States, Team Nigeria lost to Italy, Germany and Australia in the Preliminary Rounds, keeping them off the Summer Olympics podium. Coach Brown’s new team roster, focusing more heavily on Nigerian players, met defeat in AfroBaskets 2021 from the Ugandan team.

With the NBA season kicking off in October, Brown is focusing on his sixth year as assistant coach of the Golden State Warriors. He said he plans on helping Team Nigeria whenever and in whatever way he can, as long as they continue to need and request his help.