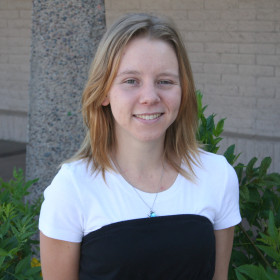 Nikelle Mackey, a Mesa Community College Art student, was recently awarded the Presidential Scholarship at Ringling College of Art and Design in Sarasota, FL. She was ranked in the top one percent and selected out of 1,400 total applicants.

The Presidential Scholarship, the highest award given at Ringling College, will provide Nikelle with a total of $80,000 based on a four year degree plan. The scholarship will cover two-thirds of the cost of her education.

“Words can’t describe it. I never thought I would get accepted or be awarded this type of scholarship,” commented Nikelle.

Beginning in the fourth grade, Nikelle was homeschooled until she graduated high school. She began taking classes at MCC in 2008, participating in early college courses while home schooling. She recalls her first class at MCC was a Japanese language course. She also took classes at Central Arizona College while in high school.

Nikelle stated, “The early college courses and home schooling were grueling but it prepared me for the expectations placed on College students and made it an easier transition for me.”

While at MCC, she has not only excelled as an art student but was also involved as a Phi Beta Kappa member and served as a past Vice President of Service. In addition, she dedicates numerous hours volunteering time in her community.

She states, “I am looking forward to starting a new chapter in my life. MCC has given me the boost needed and laid out opportunities for me. Now I can move forward. Without MCC, I couldn’t have gotten this far. I will be sad to leave one of the best art programs and its teachers here, but I want to make them proud.”

Nikelle will begin classes this fall at Ringling College of Art and Design, majoring in Business Art and Design. The College is well known for its connections to DreamWorks, Disney, Pixar, MTV, and others.

Nikelle hopes to one day start her own business working with talented artists, providing opportunities to help them advance while promoting art and design.

This alumni profile first appeared in the Summer 2012 edition of Alumni & Friends, a publication for the Mesa Community College Alumni Association.  http://mesacc.edu/sites/default/files/pages/section/about-mcc/institutional-advancement/communications/Summer%202012%20newsletter_final-web.pdf