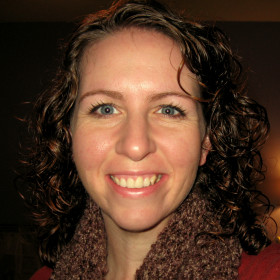 Molly O’Dwyer took a circuitous route from Mesa Community College to the University of North Carolina, where she received her Master’s Degree in Information Science in December 2013.

O’Dwyer, now 30, grew up in Mesa and graduated from Mesa High School before attending MCC. She received MCC’s Alumni & Friends scholarship in the spring of 2004, and attended MCC from 2001-04.

“I never regretted going to a community college to start my education,” she said. “MCC was always a better option for me. I figured I was more likely to finish because I took the classes there rather a university, where I could have been overwhelmed by the class size. Going to MCC allowed me to transition to higher education.”

Molly transferred to the University of New Mexico after MCC, graduating with a Bachelor’s degree in history in December, 2006. “I was trying to figure out what to do after UofNM, and I looked at a lot of schools,” she said. “I had an interest in museums and research, but information science provided more career options. I eventually decided on the data management side, and I’m looking to work for a company in data management or project management.”

She chose UNC because of its proximity to the famed Research Triangle Park, an area situated between UNC, North Carolina State University, and Duke University. “It has a lot of large technology, health and pharmaceutical companies, like Cisco, and those are the companies I’ll be targeting,” Molly said. “There’s a lot of research going on there, a lot of opportunities, and there’s a lot of data management and data analysis that needs to be done.”

Molly said another advantage to attending MCC was mingling with older students. “They were a good example of lifelong learning, of not giving up,” she said. “It was nice to be around older mature students.”

Today Molly continues to extol the virtues of a community college education, including those she meets in North Carolina. “Every time I talk to new students I always direct them to community colleges because I had such a great experience at MCC,” she said. “It’s definitely the way to go to start your education.”

This alumni profile first appeared in the Spring 2014 edition of Alumni & Friends, a publication for the Mesa Community College Alumni Association.  http://mesacc.edu/alumni/newsletters/spring-2014/scholarship-recipient-completes-masters-degree-touts-mcc-and