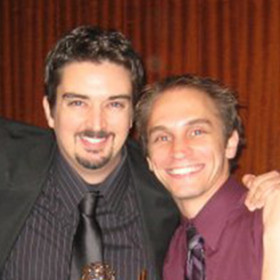 If you look closely at the Emmy Award-winning webisode series, “Probed: Signals,” you might catch a glimpse of Mesa Community College’s Southern and Dobson campus, where part of the series was filmed.

But even more impressive is the success that MCC alumni Kevin Herrmann and Joel Cranson have had with this creative venture.

Writer/director Joel Cranson created the short screenplay, inspired by the TV series, “The X Files.”   He explored the same character archetypes and situations as the show, but used the setting of a high school.

Wanting to explore the new concept of a webisode series, a web-based TV show, Cranson decided to use the short film as a pilot and expand the film into a series. Joel enlisted the help of Herrmann to write a 5-episode web series. After several re-writes, and months of shooting weekends, production was complete and post production was quickly underway.

“It was an experiment for our team,” Cranson said.  “It’s a new media. People are turning to more and more to the Internet for entertainment.”

Cranson said the experience was an adventure and people are still watching the completed series online, so they must have done something right.

“Webisodes are so new, even the very successful ones don’t know if what they are doing is right,” Cranson said. “We had a lot of fun doing it, but we have no further plans for more episodes.

This alumni profile first appeared in the Summer 2011 edition of Alumni & Friends, a publication for the Mesa Community College Alumni Association.  http://mesacc.edu/sites/default/files/pages/section/about-mcc/institutional-advancement/communications/Summer2011newsletter.pdf