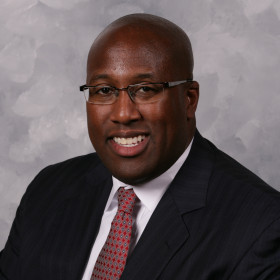 Mike Brown, the coach who guided the Cleveland Cavaliers to the 2007 NBA Finals, got his start at Mesa Community College.

Brown attended MCC from 1988-90, playing basketball under former MCC coach Tom Bennett.  Brown went on to graduate from the University of San Diego with a business degree in 1992 and began his NBA career with the Denver Nuggets.  Over the next decade he helped coach several teams, including the Washington Wizards, the San Antonio Spurs, and the Indiana Pacers.  He was hired as head coach of the Cavaliers in 2005.

Brown said he remembers how friendly the MCC campus was and it was there he met a very important person who greatly influenced his life—coach Tom Bennett.

“I struck up a great friendship with Tom Bennett,” Brown said.  “He coached me and helped me mature into a man.”

The two friends stay in touch and during the 2007 NBA Finals, Brown flew Bennett to watch one of the games.

“It was a small way to say thanks,” Brown said.

Bennett remembers Brown's incredible dedication and focus when he was a student at MCC.

“Virtually every day he was at MCC he did extra practice,” Bennett said.  “He's still the same.  When I visited with him several years ago, we sat at 2 a.m. eating cereal and watching NBA films.”

Although Brown was disappointed that the Cavaliers' first trip to the NBA finals was a short one—the San Antonio Spurs defeated the Cavaliers 4-0—he considers the series a positive experience.

“How high we finish is always a journey,” Brown said.  “It was fun.  I was proud of our guys and our organization.  If we get there in the future, we'll be even better prepared.”

Brown and his wife, Carolyn, are actively involved in community charity work in Cleveland, where they are raising their two sons, Elijah and Cameron.

Bennett said Brown is just great with both personal and professional relationships.

“He is where he is today because of the quality person he is,” Bennett said.  “It's cool to see someone like him with such good qualities succeed.”

This alumni profile first appeared in the Fall 2007 edition of Alumni & Friends, a publication for the Mesa Community College Alumni Association.  http://mesacc.edu/sites/default/files/pages/section/about-mcc/institutional-advancement/communications/A&FFall07.pdf