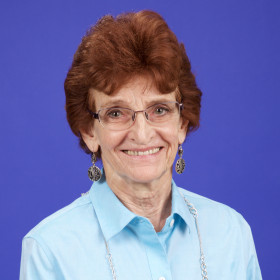 Lyn Dutson was a theatre and speech instructor who taught at MCC for 40 years. The winner of numerous teaching, service, and theatre awards, she was named MCC Outstanding Teacher in 1992-93, and MCC Distinguished Woman of the Year in 2008. She’s been an instructor and student at the Arizona Ch’uan Fa Society since 1997, and has a black belt in Chinese Kempo.

What has always made Lyn Dutson special is her relationships with people. Former student Shirley Baxter praised Lyn for encouraging her self-confidence enough to achieve an Associate in Arts at MCC, which Shirley didn’t think possible before she met Lyn. When another former student, Connie Morris, came to MCC, Lyn instilled in her a confidence that she could do whatever she wanted to in life, even though Connie is blind. It led to a degree with honors for Connie from ASU, a new friendship, and more community service for Lyn, who has been a volunteer driver for the blind for more than a decade.

Lyn, who has a Master of Arts degree in Drama from ASU, has won several AriZoni Awards for costuming excellence, earned the Award of Excellence in 2000 from the Arizona Theater Alliance, and an Excellence in Theater Education regional award in 2008 at the Kennedy Center American College Theatre Festival. She was named MCC Professor Emeritus in 2009 and Maricopa District Professor Emeritus in 2010.