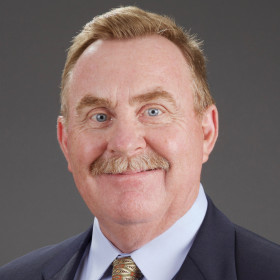 Ken Phelps played baseball at MCC in 1974, where he earned First Team All-Conference and First Team All-American honors. He holds an MCC record for 17 homeruns in a season and went on to Arizona State University, where he was named to the College World Series All-Star Team in 1976.

Ken was drafted by Kansas City Royals in the 1976 Major League Baseball draft, gaining a reputation as a feared homerun hitter. In a three year span, he hit over 80 homeruns while knocking in more than 200 RBIs. His 11-year professional career included playing for the Seattle Mariners, New York Yankees, and the Oakland Athletics, which included a World Series Championship in 1989.

Ken’s final homerun of his career was quite memorable. Seattle Mariners Brian Holman had pitched a perfect game, retiring the first 26 batters in succession, when Phelps was called out to pinch hit in the bottom of the ninth.  His homerun ruined Holman’s perfect pitching streak and ensured that Phelps didn’t appear on ESPN that night for making the out that would have completed Holman’s game shutout. Phelps holds the American League record for the fastest to reach 100 homeruns, and is the second fastest player in Major League Baseball history to reach 100 homeruns.

Phelps’s post baseball career has included color commentary for the Arizona Diamondbacks, baseball analysis for Fox Sports, and community and media work for Arizona Public Service. Two of the programs in which he has been involved - The ABC’s of Baseball, and Life and Power Players - have gained national recognition for their positive impact on children.