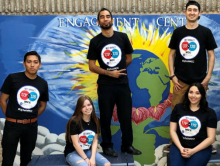 MESA, Arizona – June 17, 2020 – The Mesa Community College Up to Us team receives top prize in the Up to Us National College Competition for its efforts in raising awareness of the national debt and America’s fiscal problems. MCC is the first community college in the eight-year history of the award to receive this recognition.

The MCC student team, led by Shelby Lynch, who graduated from MCC in May 2020, developed a multi-faceted campaign focused on raising awareness about the national debt and initiating a dialogue on building a sustainable economic future for all Americans. The team engaged with fellow students during the fall 2019 semester through a series of targeted events, awareness surveys, classroom presentations, campus partnerships, engagement with college administrators and the deployment of impactful social media content.

“My teammates and I joined the Up to Us Campus Competition to spark a dialogue on campus about the very real consequences that the national debt could have on our future, and the importance of fiscal sustainability,” said Lynch. “We focused on making the national debt more relatable to members of our generation by incorporating activities that appeal to our peers – games, interactive tabling activities, nonpartisan political parody and social media sharing.”

The MCC team’s imaginative, student-oriented events included a Halloween-themed “National Debt House of Horrors” introducing students to “scary” facts about the national debt through collaborations with campus clubs and departments. They also hosted a national debt trivia event in partnership with Brian Dille, Ph.D., an MCC political science professor. The team produced and performed a satirical skit of the world in 2032 if the national debt continues to skyrocket, followed by a discussion about the potential consequences for young people. In addition to students, the team engaged college administrators in a one-mile walk around campus distributing informational fliers while toting informational posters and chanting about the national debt. The walk was followed by a guided discussion on the significance of the national debt.

“As we confront our nation’s overall fiscal sustainability challenges, as well as all of the fiscal and economic impacts of this current crisis, it is clear that young leaders like these students from Mesa Community College will have a critically important voice in helping restore and build a vibrant economy of the future,” said Michael A. Peterson, CEO of the Peter G. Peterson Foundation, in an Up to Us press release. “The innovative campaigns created as part of this year’s Up to Us competition can inspire leaders to re-focus on national preparedness across a range of key areas impacting the next generation, including our fiscal outlook.”

Lynch and team members Aaron Millett, Mitchell Stewart, Gabriel Castaneda, Landon Kea and Bailee Shupe joined students from teams from across the country in a series of national virtual events in May 2020 where their efforts were recognized and they were able hear from Michael A. Peterson, CEO of the Peter G. Peterson Foundation and Sheila Bair, the 19th Chair of the U.S. Federal Deposit Insurance Corporation. The MCC Up to Us team receives a $10,000 cash prize supporting the continuation of its efforts for the next academic year.

Up to Us is a movement of a generation, for a generation that lets policymakers know that young Americans are committed to addressing the nation’s fiscal challenges. Since 2012, Up to Us has created a groundswell of student leaders who’ve engaged and empowered more than 370,000 of their peers towards a more prosperous fiscal future. Created in partnership with the Peter G. Peterson Foundation, Clinton Global Initiative University (CGI U) and Net Impact, Up to Us provides the opportunity for students to build a movement to raise awareness and engagement on America’s fiscal challenges, and hosts an annual competition that takes place on college campuses nationwide.

Mesa Community College is nationally recognized as an Aspen Prize Top 150 U.S. Community College and is known for service learning, career and technical programs, civic engagement and innovative approaches to education. The college has served as a resource for career readiness, transfer education, workforce development and lifelong learning throughout its 50-year history. Host to more than 30,000 students annually, MCC offers degree and certificate programs online, and at its two campuses and additional locations. Through Guided Pathways with Integrated Support Services, MCC is transforming the ways it champions student success, college completion, university transfer and career attainment or advancement. MCC is a Hispanic Serving Institution and more than 50% of its students are the first in their family to attend college. Its American Indian Institute serves 22 federally recognized Arizona tribes and more than 30 out-of-state tribes. The diverse student body includes more than 400 international students representing over 60 countries. Award-winning faculty are dedicated to student success, providing the education and training that empowers MCC students to successfully compete in the workforce. Located in the East Valley of Phoenix, Arizona, MCC is one of 10 colleges in the Maricopa County Community College District. Visit mesacc.edu to learn more.

MCC is accredited by the Higher Learning Commission (HLC), hlcommission.org.

The Maricopa County Community College District (MCCCD) is an EEO/AA institution and an equal opportunity employer of protected veterans and individuals with disabilities. All qualified applicants will receive consideration for employment without regard to race, color, religion, sex, sexual orientation, gender identity, age, or national origin. A lack of English language skills will not be a barrier to admission and participation in the career and technical education programs of the District. MCCCD does not discriminate on the basis of race, color, national origin, sex, disability or age in its programs or activities. For Title IX/504 concerns, call the following number to reach the appointed coordinator: (480) 731-8499. For additional information, as well as a listing of all coordinators within the Maricopa College system, visit www.maricopa.edu/non-discrimination.