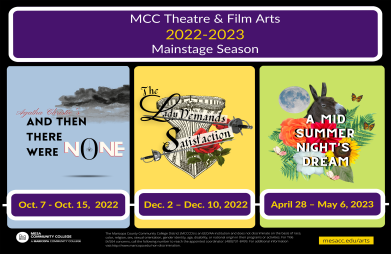 “We’ve made season passes available, allowing patrons to enjoy all three mainstage shows for the cost of two,” said Mace Archer, MCC faculty and co-director of the Theater and Film Arts department. “This year we are presenting two comedies and a mystery. Our interpretation of the classics selected for this year’s performances will showcase the talent and skill of both our students and our faculty. ”

Kicking off the season is Agatha Christie’s classic mystery, “And Then There Were None.” Set on an isolated island, 10 strangers are invited to a weekend under false pretenses. As one after another of the guests is discovered dead, the rest are left to reveal the murderer before they each meet their untimely demise. Audience members will be challenged to identify the murderer before there are none in this masterpiece of mystery. This classic mystery runs October 7-15.

Next is, “The Lady Demands Satisfaction,” by Arthur Jolly. This comedy features the trappings of farce, mistaken identities, gender switching and high stakes duels all in the name of love. Set in an era of amazing sword-play, audiences will be delighted with its clever sense of humor and lively stage combat. And in this play, the ladies do all the sword fighting! Directed by guest artist David Barker, “The Lady Demands Satisfaction” looks to be a highlight of the theatrical season. The laughs from this show run December 2-10.

The final show of the season is Shakespeare’s “A Midsummer Night’s Dream.” MCC’s version of this classic comedy is set in the Disco-era with the backdrop of Studio 54. With Oberon as club owner and Titania as his Dancing Queen, what could possibly go wrong when the party lasts all night long. Shakespeare’s lovers will woo to the BeeGees and Bottom will struggle mightily beneath the stars of the mirror ball. Midsummer runs April 28 through May 6.

An education in Theatre & Film Arts at MCC provides a valuable base from which to launch careers in film, television, stage, management, marketing, advertising, law, politics, theology, social work, or therapeutic fields. Students are provided opportunities to work with industry professionals from across the country and be successful at national competitions such as the national Kennedy Center American College Theatre Festival and the AriZoni Theatre Awards of Excellence. Experience ranges from acting, design, writing, directing and serving as a crew member in a variety of productions.