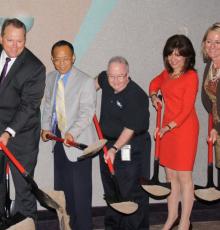 Shoveling for the Groundbreaking On August 16, MCC broke ground for a new Performing Arts Center and Art Gallery at the former Harkins Theatre Complex on Longmore Street in Mesa.

Administrators from the College, Maricopa County Community College Administrators and Governing Board Members, along with City of Mesa officials participated in the ceremonies and spoke about the importance of the new facilities to the Community.

Mayor Scott Smith stated, "MCC will always play a central role in Mesa and define who we are in Mesa. Thank you for always being a shining beacon in our community."

The Harkins Fiesta 5 Theatre originally opened in October 1979 and was operated by Mann Theatres. In the late 1980’s Harkins acquired several of the Mann Theatres, including the Fiesta 5. Thirty years later, MCC purchased the Harkins and Fuddruckers properties for future expansion and the Fiesta 5 closed in May 2009.

In fall 2004, voters approved a $951 million bond for the Maricopa County Community College District which included $90 million for new construction and remodeling and $25 million for technology and site improvements for MCC. The Performing Arts Center and Art Gallery projects are a result of the 2004 Bond Initiative.

DWL Architects + Planners, Inc. will design the MCC Art Gallery. They previously worked with MCC in the design of the Paul A. Elsner Library, Life Science Building, and the original Red Mountain campus. The new Art Gallery will be located on the south side of the Southern and Dobson campus, close to the Theatre Outback.  Student, faculty, college and national art shows will be held in the new facility. The Art Gallery should be completed by summer 2013.

Scheduled to open spring 2014, The MCC Performing Arts Center (PAC) is being designed by Jones Studio of Phoenix. The unique PAC design will include adding a 462 seat theatre venue to the present Harkins building. Extensive remodeling of the present Theater will provide for a band room, choral room and production support space. Musical plays, dance recitals, band and choral performances, recitals and more will be held in the new facility.

Dr. Rodney Holmes, Dean of Instruction at MCC stated, “In the past, MCC held almost 100 performances around the East Valley that will now have a home in a state-of-the-art teaching and performance facility. It will help us reduce the expenses for renting performance space and decrease the demands on the Theater Outback, which will now only house the Theater department.” He added, “The new Performing Arts Center and Art Gallery, combined with the remodeled Theatre Outback provides MCC new and updated facilities to showcase the talents of students, faculty and staff in cutting edge venues while providing opportunities for community members to enjoy the performing arts. The new PAC will have a positive impact on the Fiesta District revitalization efforts.” 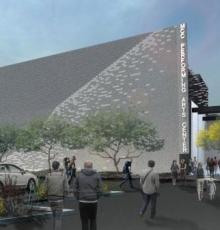 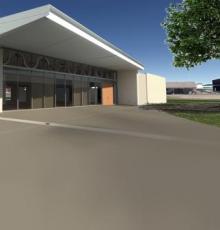