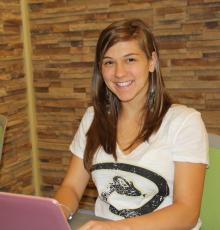 The growth of consumer technology, from smartphones, to tablet computers and laptops, has sparked an increase in interest in Computer Science classes at Mesa Community College.

According to Karl Zerangue, a computer science faculty member at MCC, the CS department has seen many changes in enrollment in last five years. The department has gone from regularly canceling sections that did not have enough enrollment to carefully deciding how many sections of each course to offer since most of them fill quite easily now.

“Although it is difficult to determine a single reason for the increase in students interested in computer science, the fact that computers are everywhere certainly must be part of the reason, Zerangue said.  “Many students carry smartphones, tablet computers and laptops.  The availability of such devices has led students to want to do more than just use them.  Many students also want to know how to program them in order to make these devices do something unique and different.”

Zerangue said often students who take his class want to write iPhone or Android apps. In MCC’s introductory courses, what students learn about constructing software is directly applicable to writing the apps they want to create. The skills learned provide them with the ability to take their programming talents to any platform.

MCC computer science students are typically those seeking a four-year degree from a university. Some take advantage of the MAPP program with ASU that easily transfers MCC credits to ASU. Others simply take computer science classes they know they need to complete their bachelor’s degree, for less money per credit hour than at a university.

Still others are not majoring in Computer Science and have different reasons for taking CS courses: they may want to increase their knowledge of programming or a specific programming language; they may want to transition their current career into a more technical role that may or may not involve programming.

Computer science major Lesley Oliver said she plans to transfer to Arizona State University to pursue bachelor’s and master’s degrees in computer science after earning an associate’s degree at MCC.  Originally from a small town in Texas, she has been interested in the field for a long time.  Her interest peaked when she took a computer class and learned HTML in high school. She taught herself C++ programming language and wanted to learn more.

“I wanted to know more about how to write software and was curious about user input,” Oliver said.  “My computer class at MCC has been a great way to expand my knowledge. Plus, I knew it would be a good career choice.”

Oliver said she would recommend the classes at MCC to others who are thinking about pursuing a career in the field.

“The class makes it easy to learn, especially for beginners,” Oliver said.  “MCC classes slowly ease you into it in a low-cost way and prepare you for the university.”

Oliver acknowledged that the field is growing rapidly with the proliferation of consumer products. She is interested in specializing in software architecture or becoming a programmer analyst, but hasn’t decided exactly what path she will choose.

Zerangue explained that it can be beneficial to have another area of expertise in addition to Computer Science.

“This makes a graduate more desirable in the job market and increases one’s chances of working in a field that the student finds interesting,” Zerangue said.

The Bureau of Labor Statistics states that the employment of computer and information research scientists is expected to grow by 19 percent from 2010 to 2020, about as fast as the average of all occupations. Median pay for job seekers with a doctoral or professional degree is $100,660 per year or $48.39 per hour.

For more information on Computer Science at MCC, visit http://www.mesacc.edu/programs/computer-science

Please direct media inquiries to Angela Askey at angela.askey@mesacc.edu or Sally Mesarosh at sally.mesarosh@mesacc.edu  or the Office of Institutional Advancement at 480-461-7445.  IA website: www.mesacc.edu/ia.