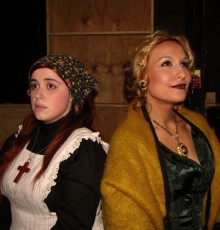 The Caucasian Chalk Circle, a play written by the famous German author Bertolt Brecht and directed by Arizona favorite, David Vining will take the stage at Mesa Community College’s Theatre Outback with a performance run January 25, 26, 31, and February 1 at 7:30 pm. Matinee performances will be held January 26 and February 2 at 2:00 pm.

The Caucasian Chalk Circle takes its main storyline from the tale of Solomon in the Old Testament where Solomon is forced to judge who is the real mother of a child, when two different women claim parentage.

Bertolt Brecht is one of the most famous theatre theorists. He believed theatre was for teaching important principles to an audience. To make sure the audience’s intellect was engaged with his plays, he attempted to create theatre techniques to make the audience less emotionally involved with his play’s characters. His initial theory did not work and audience members still heavily identify emotionally with his characters. Many of his theatre techniques remain in popular plays to this day including actors falling out of character to speak directly to the audience, only to quickly pop back into character again; actors playing more than one role; men playing women and vice versa; and actors doing wardrobe changes in front of the audience to become a different character. His influence can be seen in theatre throughout the world and continues to influence playwrights, directors and designers.

Ticket prices for The Caucasian Chalk Circle are $10 for general admission and $7 for seniors and students with an ID. Tickets may be reserved in advance by calling the Theatre Outback Box Office at 480-461-7172. Tickets will also be available at the door for all performances.

Please direct media inquiries to Angela Askey at angela.askey@mesacc.edu or Sally Mesarosh at sally.mesarosh@mesacc.edu  or the Office of Institutional Advancement at 480-461-7445.  IA website:  www.mesacc.edu/ia.