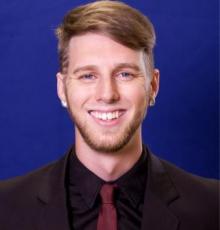 Andrew Kuhn Andrew Kuhn, a third year student majoring in Organizational Management at Mesa Community College, will serve as the 2012-2013 President for the Associated Students of Mesa Community College (ASMCC).  ASMCC works to advance the needs and interest of all students by promoting and maintaining a democratic form of student government by uniting students, faculty, staff and administration.

Andrew moved to Arizona from Pennsylvania. Prior to coming to MCC, he attended three different colleges and explored four different majors. It was after coming to MCC that he became involved in a student club which helped him meet other students who shared a common interest. It also helped him decide on a major. Before being elected President of ASMCC, Andrew was the Senator and President of the Environmental Action Club and Secretary of Press for ASMCC.

As the new president, Andrew’s main goals are to create more student involvement and student leadership opportunities. He stated, “I believe being involved is the key to success. It can help build a network of people. The more involved students are in extracurricular activities, the more involved they become in their academics.”

This fall, ASMCC will focus on Identifying and advocating for student issues. The focus will be educating students about the local and presidential elections. ASMCC will hold candidate forums, debate watches and election parties.

To continue to encourage civic involvement in the spring, ASMCC will concentrate on building beneficial relationships with local and state organizations, such as the Chamber of Commerce. This will provide student awareness about events and volunteer or paid leadership positions they can become involved in. Additionally, Andrew is hopeful the community will come to MCC to seek student leaders.

Other plans include the development of a student leadership program between MCC and local high schools to help get students involved from the start of their college education.

The first ASMCC event will be a Voter Registration and Ballot Initiative Training on September 10, 2012 at 3:30 pm in the Kiva Room of the Kirk Student Center. The event is open to anyone. Students are encouraged to watch for announcements of this and upcoming events around campus.

There are still ASMCC positions available. Applications can be picked up in the Student Life or ASMCC office. The deadline to apply is September 2, 2012.