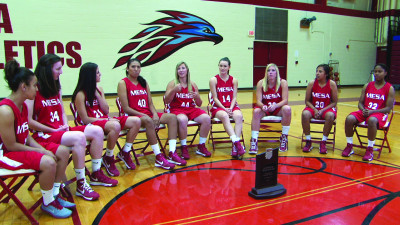 Simply put, it was the greatest season in Mesa women’s basketball history.

The Thunderbirds finished second in the nation in NJCAA Division II competition with a run through the national championship tournament, completed by an extremely young group which fashioned a final 27-7 record.

Seventh-year coach Kori Stevenson, and assistants Sam Stevens and Ben Nelson, had only three players returning from a year ago when they greeted their 2012-13 team in the fall. Although the 2011-12 squad had captured fifth place in the NJCAA event, it was heavily dominated by sophomores.

Stevenson, however, was still confident in her team’s chances.

En route to their outstanding national finish, the T-Birds did not lose a single game to Division II competition until the final loss to Louisburg (N.C.) in the NJCAA tournament. In fact, Mesa played 12 of its 34 contests against Division I teams and won half of those, including victories over some top-flight competition.