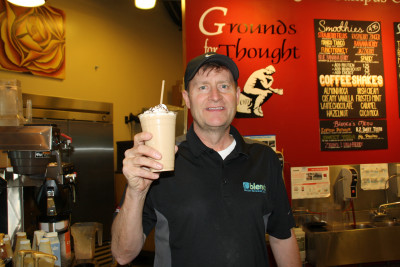 Stephen Morgan Every time Mesa Community College alumnus Stephen Morgan steps foot on the Southern and Dobson campus, he thinks about the first time he came to campus in the ‘80s.

“I was living in Flint, Michigan, it was cold and my car wouldn’t start,” Morgan said. “I sold my car, bought a plane ticket to Arizona and signed up for classes at MCC.”

Morgan never looked back. After finishing core classes at MCC, he transferred to Arizona State University and completed a bachelor’s degree in finance. He now owns his own business, Blendz Frozen Beverage Company, and regularly visits MCC’s Southern and Dobson campus to deliver beverages and coffee-related products to the campus’s Grounds for Thought coffee shop.

“MCC was perfect for me,” Morgan said. “The idea of ASU was a little overwhelming. It was nice to start at MCC, where the classes were smaller and you received more attention from the professors. It was much different when I got to ASU. There were 300-400 people in my classes.”

After graduating from ASU, he worked for Sysco, a food distribution company, and eventually started his own business in 2010. Grounds for Thought was his first official business customer.

“I tell college students not to worry about choosing a major, because you’ll probably change it,” Morgan said. “If I could do it over, I’d probably pursue a marketing or hospitality degree, but it’s a good idea just to try to find something you’ll enjoy, earn a degree and follow your passion.”