A Letter from MCC's President 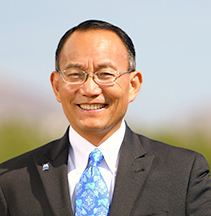 I am pleased to inform you that in January, Mesa Community College (MCC) was recognized by the prestigious Aspen Institute College Excellence Program as one of the top 150 colleges in the U.S. based on student outcomes in performance, improvement, and equity. 2016 will be of year of accomplishments accompanied by significant changes for our college and district.

As you know, MCC is part of the Maricopa County Community College District (MCCCD). We are overseen by a seven-member, elected Governing Board, which sets policy for our $1 billion organization. This November, four of those seven seats are up for re-election.

MCCCD will also be conducting a search for a new chancellor. After 30 years of service to MCCCD, our current chancellor, Dr. Rufus Glasper, announced he will retire at the end of February. He has accepted a position as president and CEO for the League for Innovation in the Community College, and we wish him well. The chancellor reports to the Governing Board and provides executive leadership for our system of ten colleges, two skill centers, and a corporate college for workforce development.  The Governing Board has announced that chancellor search committee will be chaired by ASU president Dr. Michael Crow and Maricopa Faculty Association President Salina Bednarek.

The upcoming year will also bring continued discussions throughout MCCCD about funding. Historically, MCCCD has been funded by three sources: property tax, tuition, and state allocation. Since 2009, MCCCD’s state allocation has gone from $59.5 million to $7.4 million, and in 2016, state support was eliminated completely. With property tax and tuition as our remaining sources of revenue, the system is more sensitive to fluctuations in enrollment.

Since 2010, enrollment throughout MCCCD has declined 11%. At MCC, we’ve experienced a 19% decline. While we’ve sustained our current service levels, we are engaging in difficult discussions about how decreased revenues will impact our students and college.

MCC is already taking steps to consolidate resources. MCC’s Outreach Center and Office of Community Partnerships which currently reside at the Downtown Center in Mesa will soon be moved to our Southern & Dobson and Red Mountain Campuses, respectively.  Ultimately, all property is owned by MCCCD, and our elected Governing Board will make the final decision about the future of MCC’s Downtown Center.

MCC’s Red Mountain Campus’s fall 2015 enrollment was 2,962 students, which is a 33% decrease since 2010. A Task Force of Red Mountain employees convened over the past year to provide recommendations to boost enrollment at this important location. We are currently piloting a new class schedule that shows promise of attracting more students to the campus. More information is available at www.mesacc.edu/2-4-1.

MCC’s commitment to student success continues to be a key priority.  New data show that at MCC, the achievement gap between high- and low-performing students is closing, and students in development education are succeeding at higher rates.  Overall success rates in developmental courses have increased from 62% in fall 2014 to 67% in fall 2015. As MCC moves forward with its new Academic Master Plan that focuses on Guided Pathways to Success which calls for more structure and a more coherent set of academic options for students, we expect to report even higher student retention and completion rates.

As alumni and friends of Mesa Community College, 66% of you still live in Maricopa County, giving you an incredible opportunity to stay engaged with your alma mater. Regardless of where you now reside, I hope that you’ll engage in the dialogue surrounding your local community college. Data show that students who successfully complete college tend to earn more and enjoy improved quality of life, while their community benefits in terms of civic engagement and higher tax revenues. I hope you share my perspective that education is imperative, that it changes lives, that it helps drive the economies of the cities in which we live, and that it is the hope for the future of our country.