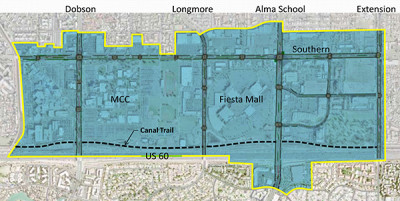 In the 1980s, Mesa’s Fiesta District was considered one of the Valley’s foremost shopping and entertainment districts. The area, which encompasses U.S. 60 to Southern Avenue, and Extension to Dobson roads, experienced a gradual decline after the opening of several competing venues in other parts of Mesa, including Superstition Springs, Arizona Mills, Riverview and Tempe Marketplace.

After advice from urban-planning experts in 2009, the City of Mesa faced facts that Fiesta would never again be a regional retail mecca, but could be suitable for mixed-use, urban-style development. Plans were put into motion to make the area more pedestrian-friendly and offer catalysts for private investment.

Revitalization has begun. In October, the City of Mesa opened a new police station southeast of the Bank of America tower on Alma School Road. Workers are now in the process of tearing up Southern Avenue for a $10 million reconstruction and landscaping project.

A new police station southeast of the Bank of America Tower on Alma School opened in October.

Mayor Scott Smith has named Fiesta as one of four key economic-development nodes across the city. Mesa Community College, one of the main anchors for the district, is playing a major role in the revitalization by moving forward on several large construction projects.

The former Harkin’s Theatre at the Southeast corner of the campus is being remodeled into a new Performing Arts Center. The center will support music and dance programs and bring many performances back to campus which are currently held off site. A new Art Gallery and Enrollment Center will also provide more opportunities for Mesa residents.

Question: Steve, in your opinion, does the Fiesta area have a good chance of being successfully revitalized into a thriving urban area?

Q: What role would MCC play?

A:  As a major landowner, employer and attraction in southwest Mesa, MCC will play an important role in the revitalization of the area.  There are opportunities for partnerships between MCC and other private and public institutions for shared use of facilities.  MCC's Community Rose Garden serves as a current example.  There are also opportunities for shared marketing, such as discounts at local establishments for MCC students and employees, and on-campus job recruitment by local employers.  MCC possesses enormous resource talent among our employee and student populations.  It will be beneficial to utilize this talent in the planning and implementation of Fiesta District improvements.

Q: What is the biggest factor in making the revitalization successful?

A: While revitalization of the Fiesta District is dependent upon the strength of the economy at the macro level, much can be done locally.  It is important that we view the Fiesta District as inclusive of surrounding neighborhoods.  The era of "big-box" land uses in inner suburban locations is being replaced by mixed-use developments, where housing, employment and entertainment are located within close proximity.  Mesa has taken a step in this direction by investing in a streetscape project along Southern Avenue in an effort to attract new residents to the area.  A key component to the success of the Fiesta District will be a frequent and convenient transit connection to the light rail extension along Main Street.