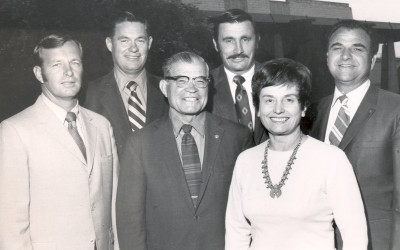 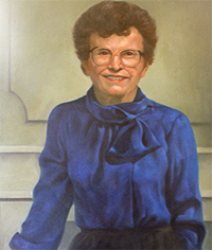 The name Kirk may be immediately reminiscent of the Student Center on the Southern and Dobson campus, but for some the name evokes memories of the amazing woman, Jinnett Kirk, whom the building was named after.  Jinnett Kirk worked for 14 years at MCC; as the Dean of Students she made it her goal to guide and encourage students.

She went above and beyond her job description, championing students when they were struggling, creating and advising numerous student clubs, and often inviting students to her house.  Kirk’s daughter, Joan Hancock, recalls that sometimes there would be as many as 75 students in their home.

Described as a “vivacious, petite brunette with sharp, dancing brown eyes,” Kirk was not physically intimidating, but she had an inner fire that drove her to put others’ safety before her own, no matter the size or intensity of her opposition.  Retired Theatre faculty, Lyn Dutson, remembers her as “one of the quiet powerful women of the world, an amazing role model of feminine power without aggression.”

"There is nothing I would rather have spent my life doing than working with students,” Jinnett Kirk Shirley.

Kirk was devoted to helping the students; it was more than a job, it was her passion.  Bill Holt, retired Dean of Instruction, recalled that when one student was sent to jail for 30 days, Kirk made sure her teacher helped the student remain caught up in the class.  On several occasions she even drove homework to students’ houses when they were unable to get it themselves.  No student was unworthy of her individual attention, no task too menial.

She also knew how to listen to students, was empathetic to their needs.  In 1970, following the shooting at Kent State University, two groups of students began arguing on campus.  When it seemed likely that violence would ensue, Kirk brought out a microphone and allowed students to speak their minds, solving the matter efficiently and peacefully.  It was this talent for respectful, caring, and peaceful conflict resolution that caused students to term her ‘friend’ and earned her the respect and admiration of faculty.

Unfailingly kind, passionate about her work, and dedicated to student success, Jinnett Kirk was an amazing woman who impacted many around her.  Alumna Debbie Hentges remembers Kirk fondly, remarking, “You always knew she cared.  She was fun.  Loved to laugh.  She enjoyed being with us students.”

Highlights of her numerous accomplishments include the Don Carlos Humanitarian Award, Tempe City Council; and the Aware Awards to Women of Achievement Minerva Award, presented by the renowned Humanitarian, Marlo Thomas. A graduate of Oklahoma A&M in Stillwater, OK, she later earned an M.A. at Arizona State University, an Honoary Doctorate of Humane Letters from Chapman College, and completed educational work at Univ. of CA at Berkley and Arizona State.  Daughter Joan Hancock notes with pride that she successfully combined a demanding career with the joy of family life and community service - “She was a wonderful mother.” 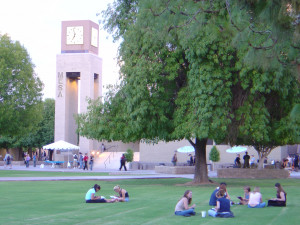 The Student Center at Southern and Dobson bears Kirk's name, an honor bestowed upon her retirement. 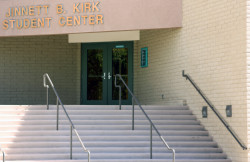