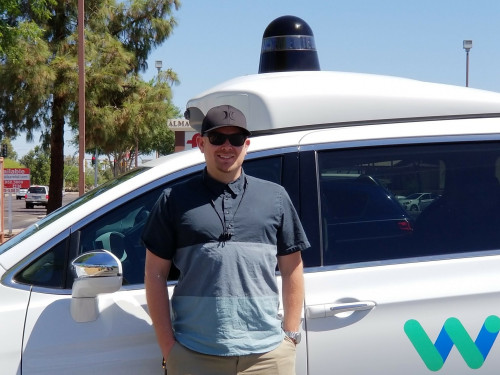 Shelby Prockish Shelby Prockish always wanted to work for Google, but he never dreamed it would be as a self-driving vehicle safety specialist. He loves the fact that he’s part of a select group that is working to make transportation easier, more environmentally friendly and helpful to the elderly and blind population.

“Giving someone that freedom will be so cool,” Prockish said. “You could wake up, get breakfast, order your self-driving car to pick you up, hop in the back and eat breakfast with no worry and no stress. It’s coming and it’s really exciting.”

Prockish was recruited by Uber while he was attending Arizona State University, working toward his bachelor’s degree. After gaining experience with Uber, he moved on to Waymo, a subsidiary of Google's parent company, Alphabet Inc.

He said it’s hard to predict the future of these cars, so much has been done over the past few years, but he wants to help make it better.

“All this just fell into my lap,” Prockish said. “When the recruiter contacted me, I thought it was a joke. But Uber picked me up and flew me to Pittsburgh for training.

“I’m a big nerd about technology anyway, and when I started this, I was like a kid in a candy store. I never intended to be a self-driving car expert, but I love it.”

He said his experience with all the MCC professors and the people he met through LeaderShape, a nationally recognized program that builds leadership skills, has helped him in his career.

“I can pull from all that interaction, experience and structure and fit it into a business setting,” Prockish said. “Patience is the key aspect I learned from LeaderShape. Things are always changing. Life is chaos and you have to have patience to go with the flow and make the best of everything.”

He graduated in May 2018 from ASU with a bachelor’s degree in sociology. He plans to work at Waymo as long as he can and eventually pursue his master’s degree after taking a breather from going to school for the last eight years.

“I tell everyone to just keep pushing,” Prockish said. “Times get rough and no one but you knows what you’re going through. Keep pushing and eventually you’ll there and it’s inspiring.”