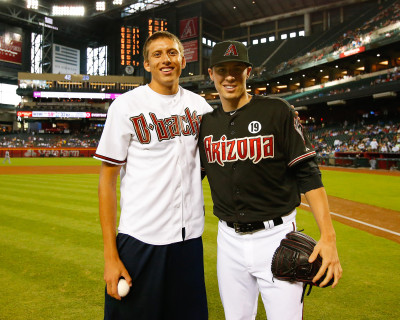 Pau Tonnensen with Arizona Diamondbacks All-Star pitcher Patrick Corbin, who caught the ceremonial first pitch thrown by Pau at the ceremony honoring him on July 10th at Chase Field. Track and field athlete Pau Tonnensen capped a remarkable career by winning two multi-event national championships: the seven-event pentathlon indoors and ten-event decathlon outdoors. What makes this accomplishment possibly unprecedented is that he did the same thing a year ago as a freshman, and although records are incomplete, it is believed to be the first time it has happened in NJCAA competition history. 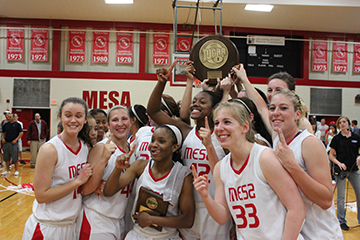 Women's Basketball Team The MCC's women's basketball squad played right to the brink of a national championship. The T-Birds didn’t win that national crown but still completed one of the most memorable seasons in MCC history by taking second place with a freshman-dominated lineup.

Mesa student-athletes performed exceptionally well in the classroom. Each year the NJCAA honors both athletes and teams with the designation “All-Academic.” In 2012-13 MCC had 19 individuals earn that honor, along with four entire teams. To earn the distinction a student-athlete must have a 3.60 or better GPA and a team must have a collective 3.00 or higher.

MCC women’s golf team won the regional title, victorious by 55 shots. It was MCC’s seventh straight regional title and its tenth in the last 11 years.

MCC women's basketball coach Kori Stephenson was honored for her great playing career by being selected to the South Dakota School of Mines Hall of Fame. Stephenson, a 1998 graduate of SDSM, was the Hardrockers' team MVP all four years and led the team to a combined 83-38 record with four NAIA Division II Tournament appearances. At MCC, she guided MCC to its greatest season ever last season, reaching the NJCAA Division II national championship game after posting a 27-6 record. Overall, in seven seasons, she has a 151-76 record and her teams have won at least 20 years for five consecutive seasons.