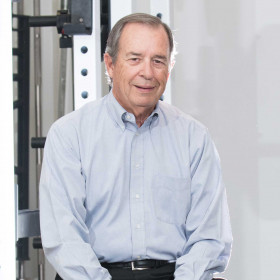 The Wayne Balmer learning affair with Mesa Community College began in the early 90s when he was community development manager for the City of Mesa. He says he studied to refresh his mind and focus on something besides his job, choosing those classes of interest that could fit into his work and life schedule.

Named Williams Gateway Area Manager in 2001, Balmer became the project manager for the civilian development of the Williams Air Force Base conversion into an international airport for cargo. He earned a Certificate in International Business and used the knowledge to establish a foreign trade zone, which attracted business investors and helped make the project a success.

Throughout his career, which culminated in 2014 when he retired as planning administrator for the Town of Queen Creek, he took online courses in a vast array of topics such as sociology, death management, human resources and marriage/family therapy. He has served on the MCC Commission on Excellence in Education since 2004.

Although still consulting, Balmer faced the dilemma of what he calls PIPs – previously important people. Those accustomed to making decisions and being busy but then finding themselves without that work purpose and too much time on their hands. To cope, Balmer turned to MCC.

“I thought as health issues creep up, how can I prepare for the next chapter in my life,” he said. “I pursued a degree in exercise science to help me understand the facts versus opinions about nutrition and exercise.”

He adds, “I was concerned about going to MCC. Are they going to laugh at the old guy in the exercise science class? Are students going to act as though I’m not a part of the class and think I dress funny? That didn’t happen! Often students came to me and asked for help or advice. I felt very included in nearly every class.”

Balmer began helping students he saw could be successful with a push through the hard parts and someone to show them skills such how to create a PowerPoint. In an Anthropology class, students seemed timid about pursuing a bachelor’s degree so he took the group to an Arizona State University open house where they saw they could belong there.

Seeing so many students struggling financially, Balmer established a scholarship that now provides $1,000 each semester for up to five Exercise Science Department students. Faculty choose the recipients who send Balmer a thank-you note.

With five associate’s degrees and 10 certificates, Balmer is still enjoying classes for knowledge and fun. Recently he took The History of Sports in American Film and Literature because it looked interesting, which he said it was.

“You hear about retired people being lonely,” says Balmer. “Come get involved in something new. Take a class and, as a senior, the already affordable tuition is half priced. After I got started on campus, it was pretty cool.”

His dedication to MCC and its students has been recognized. Balmer is being honored as MCC’s Hero of Education at the April 8, 2020 Maricopa Community Colleges Foundation Heroes of Education celebration.

In selecting him for the honor, Christos Chronis, MCC chief development officer, said, “Wayne is a shining example of our mission of teaching and learning. We are eternally grateful for his continued friendship, service and charitable support.”