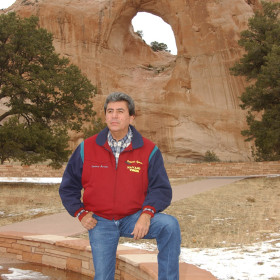 The Native American Journalists Association (NAJA) selected Mesa Community College alumnus Tommy “Tom” Arviso Jr. as the 2021 NAJA-Medill Milestone Achievement Award recipient. The award honors an individual who has made a lasting impact on media to the benefit of Indigenous communities and is given jointly by NAJA and the Medill School of Journalism, Media, and Integrated Marketing Communications at Northwestern University.

Based in Window Rock, the Navajo Times Publishing Company is the only Native American-owned and operated newspaper/publishing company in the world. Five of the past six years, the paper has been named Arizona Newspaper of the Year (non-daily) by the Arizona Newspapers Association.

Of his journey to MCC Arviso said, “I played sports – football, baseball, basketball – at Window Rock High School and our basketball team made it to the state playoffs. One of our games was played at Mesa Community College and I just really liked the campus and enjoyed the open atmosphere. It had and still has a really large Native American population.”

He was active in the Native American organization, The Hohokam Club, joining with other student clubs for events, parties and fundraisers. Arviso said that hanging out with the other students of color made campus life more comfortable and fun. Unfortunately, his second year some of his family and friends came to MCC and the Valley, and they all had a bit too much fun and he dropped out, eventually moving to work at the Tucson Indian Center.

After starting a family, he moved back to South Phoenix and was hired in 1979 at the monthly publication, The Arizona Indian, beginning his journalism career.

“All my life I’ve been an avid reader of newspapers, magazines and books, and a big sports guy,” Arviso explained. “My dad and I enjoyed reading Sports Illustrated and The Sporting News. At the Arizona Indian I went out to the different nearby reservations, writing about interesting people and their accomplishments.”

When federal grant funding for the publication ended, he went back to MCC to study journalism. Returning in 1980, he was a sports writer on the Mesa Legend. Arviso remembers it being a great newspaper staff that learned from each other.

“We had fun and I thought we put out a really good publication,” Arviso said. “One of the feature writers was Hispanic and with me being Navajo, we were the only two journalists of color on staff. It was great because we added a lot of local flavor to the newspaper. We wrote about people we knew locally and you just didn’t see them in any news here in the Valley.

“I took a beginning photography class from an instructor who was a full-time photographer at the Arizona Republic. He was smart and engaging and I learned a lot from him. I’d see his photo credit on pictures from the Phoenix Suns games and I’d think ‘That is what I want to do.’ The newspaper sponsor and the communications instructors at Mesa were wonderful in showing us how to write for newspapers, which is very different than for term or research papers.”

Arviso finished at MCC in 1981 and transferred to Arizona State University for journalism. He says that was a whole different education experience coming from MCC where “there was a lot of individual attention paid to the students and instruction was more one-on-one.”

“The incorporation of the company and newspaper was a major accomplishment for the Navajo Times and the Navajo people,” Arviso said. “We now operate as a true independent newspaper, and as a successful private business.”

May 2021 marked Arviso’s 36th year at the Navajo Times and his 17th year as the CEO/Publisher of the Navajo Times Publishing Company, Inc. As rewarding as leading such a large news publication can be, Arviso pointed out it is an all-consuming career. His cell phone is always on because news happens 24/7. He will be stepping down from day-to-day work of the paper March 31, 2022.

“You need a passion for this job and responsibility,” said Arviso. “I started out wanting to be a sports writer for the Phoenix Gazette or the Arizona Republic. But my career path brought me here to leading and guiding our Navajo newspaper, and helping my Navajo people. It has been an amazing experience and I feel that I have been truly blessed.”

Arviso explained that publishing a Native American newspaper is unlike any other news publication because the traditional culture and language are an important part of the newspaper and company.

“People tell their stories in different ways. It could be verbal, written or through art and even prayer.” Arviso said. “We use a lot of images, photos and graphs because Native and Navajo people are really visual. You can see it in our art, our rugs, our paintings, our jewelry. We use a lot of color images because our readers of all ages enjoy it and identify with it.”

An achievement of which Arviso said he is quite proud is mentoring the many young and talented Native American journalists over the years, who have gone on to important careers, winning awards and bringing diversity to today’s media.

Arviso says after a well-deserved break, he wants to continue his mentoring legacy by finding a position teaching the next generation of essential storytellers.